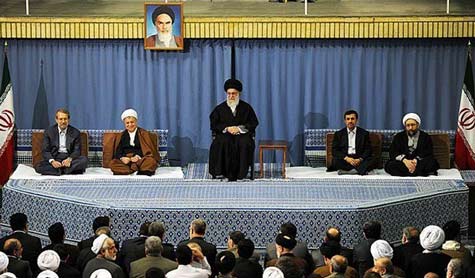 While receiving participants in the International Conference for Islamic Unity in Tehran, which ended on Monday evening, Imam Khamenei warned of "the danger of secession and sectarianism between Islamic nations," underscoring, "if enemies kindled the flames of sectarian secession, putting it out would be too difficult."
"Division between Islamic nations is considered today the most important method for enemies against the Islamic awakening," The Supreme Leader reiterated.
He further listed the problems the Islamic world suffers, ranging from "the fighting in Syria" to "silencing the oppressed Bahrainis and the fighting in Egypt."
Moreover, Imam Khamenei called for "the concept of unity," highlighting, "Islamic nations have awoken today and is capable of standing up to arrogant forces."

"If Muslims occupied themselves with their differences, the Palestinian cause and fighting the West and the US would be overlooked," the Supreme Leader pointed out.

According to Imam Khamenei, the best way to face conspiracies is unity between Islamic nations, where he urged the elites in Islamic countries to solidify the concept of unity in order to diminish conspiracies.
Furthermore, he censured "the Western intervention in North Africa," describing it as "an implementation of a new plot in this area to control the lives and resources of its people."