The assault against Islam continues. This time the US took is at the head of the hatred propaganda war targeting Islam. 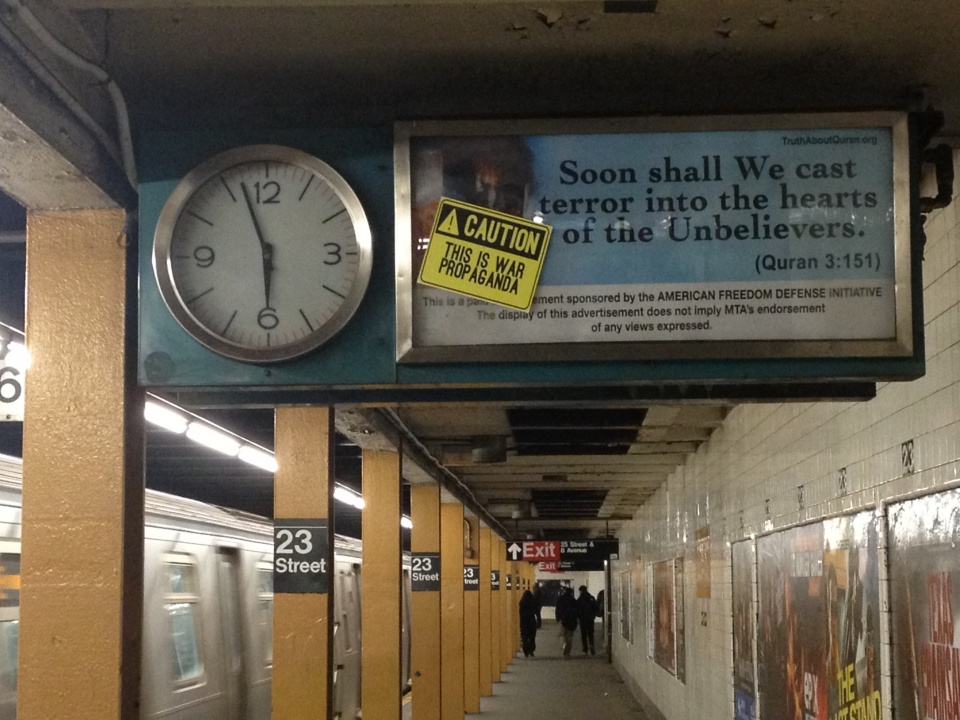 In New York, a new set of anti-Islam advertisements were placed in many of the city's subway stations by the notoriously chauvinistic "American Freedom Defense Initiative" (AFDI), headed by the right-wing anti-Muslim activist, Pamela Geller.
The group that equated Muslim radicals with savages in advertisements last year has put up another set of provocative ads.

The new ads, in which Geller's organization has reportedly invested about $70,000, feature a photo of the World Trade Center exploding in flames next to a quote from the Qur'an.
The Metropolitan Transportation Authority said the ads went up Monday and will run for a month.
The same group paid for ads to be displayed in 10 stations in September. Those ads implied enemies of "Israel" are "savages."

In response, concerned New Yorkers engaged these ads by labeling them with stickers that resembled bright caution or warning signs reading, "This is War Propaganda, and You're the Target".
One participant, who works as a filmmaker, explained, "These ads must be understood as war propaganda that target regular Americans, the public that is exposed to them."
A law student added, "Muslim communities in the United States not only endure the everyday experience of humiliating racism, but are subjected to expansive and illegitimate government surveillance, along with egregiously unjust detentions and prosecutions in US prisons and courts. These new ads work as propaganda to facilitate and support violence against Muslims in the United States and abroad."

Another woman, who is a scholar and an artist, followed, "It's abominable that these ads exploit the real suffering that fellow New Yorkers bore the day the twin towers burned to continue to incite more violence against more people. Rather than allow New York City's experience of such suffering to generate empathy for the suffering of other people in other cities facing attacks, whether by US drone strikes or other means, and seek to end such violence, they absurdly conjure Americans as innocent victims who have no choice but to be violent in a violent world."

A human rights researcher concluded, "Over the past eleven years, the US government's response to the day photographed in these ads has resulted in the killing and maiming of hundreds of thousands of people in Afghanistan, Iraq, Pakistan, Yemen, and beyond, along with tens of thousands of Americans. The United States has also threatened the Iranian people with war, and already begun a devastating campaign of sanctions against them that is effectively a war against a people by other means. ... As New Yorkers we want to make clear that the particularly vulgar manifestation of vicious racism and militarism in these ads is not welcome in our city. But more broadly, we are committed to ending ongoing US wars, both for the sake of people on the receiving end of American belligerence and bombs, and to secure the possibility of a meaningful democracy and livable future for us all.