On the tenth of the Muharram Hijri month, on the day of Ashura, hundreds of thousands of Lebanese renewed pledge to Prophet Mohammad and his grandson Imam Hussein, along with the Leader of the Islamic Resistance Sayyed Hassan Nasrallah. Sayyed Nasrallah, who appeared via video-link, promised that any coming war with the Zionist entity will include the whole of "Israel".

The Hizbullah Secretary General addressed several regional topics, including the sacrilege against Prophet Mohammad (pbuh), the latest Gaza victory, the rights of the Bahraini oppressed people, updates on Syria and Lebanon, and last but not least the Resistance battle in face of the Zionist entity. 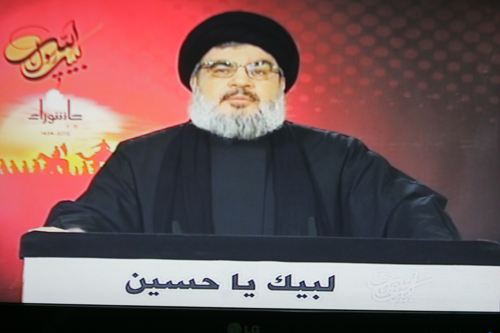 Paying homage and condolences to the Prophet Mohammad and His Household on the calamity of Ashura, which symbolizes the battle of just against injustice, and the battle of truth in face of falsehood, Sayyed Nasrallah thanked the crowds for commemorating Karbala and the memory of Imam Hussein."
Hizbullah Secretary General renewed the stance that Imam Hussein had taken and assured adherence to fighting tyranny.
"Today, we go back together to Karbala in the year 61 Hijri, the day of Imam Hussein's martyrdom. We tell Imam Hussein we are at your service! We sacrifice our souls, children, money and riches, all for your sake, and we remain to renew the promise assuring together: Woe unto the wretched (Disgrace, Never Ever)".
Starting with the repetitive offenses against Prophet Mohammad (pbuh), Sayyed Nasrallah assured "On this day, we tell the entire world that we are ready to defend our prophet against anyone who offends him. Let the entire world here our voice" O messenger of Allah we are at your service."

The battle of Karbala, according to Sayyed Nasrallah is embodied today in combatting the American-Zionist threat.
The Hizbullah leader accentuated that this US-Zionist project threatens our peoples, sanctities, dignities and religion, assuring it is a primary goal to combat it.

On this note, Sayyed Nasrallah added "I warn some sides against turning enemies into friends and friends into enemies," adding that some in the Arab world try to present "Israel" as a friend and Iran as a foe.
"Yet such conspiracies will fail. "Israel" has not been helping because of its hostile and aggressive nature. The Arab world is realizing day after day that Iran is a friend, which was highlighted in Iran's support to Gaza and Lebanon" he pointed out.

According to Sayyed Nasrallah, Iran has been supporting the Resistance movements as part of its religious and strategic duty -and has asked nothing in return-, warning the Arab peoples to beware that anyone seeking to portray Iran as an enemy is serving "Israel".

Palestine Our Central Cause

Sayyed Nasrallah iterated that Palestine is, and will remain to be the central cause. He underscored "some seek to sow strife among the people, but nothing can come between us and our support to Palestine."
Addressing the Arab and Muslim governments, His Eminence noted "Palestine does not only need your support, but your funds and arms. Such support serves the Ummah (nation) and proves "Israel" frailer than a spider web."
Sayyed Nasrallah congratulated the Palestinians on their victory again, stating "We renew our congratulations to the Palestinian resistance movements on their victory and we salute their people and martyrs. This is a real victory just like that of July 2006 and the earlier 2008 Gaza victory."

Hizbullah Secretary General moved on to tackle the ongoing Bahraini revolution, which has remained peaceful despite the violations committed against the people.
Addressing the Bahraini regime, Sayyed Nasrallah said "We urge Bahraini authorities to comply with the oppressed people's demands. The people have maintained their patience for over a year despite the oppression."
Explaining the fear of countries rejecting change in Bahrain, Sayyed Nasrallah said "They fear that this change will spread to other countries in the region."

Sayyed Nasrallah declared that the Ashura School is about fighting tyranny and injustice, and duty calls for supporting the Syrian people. "The whole of Syria, its people, and army are being oppressed. They are being targeted on several levels. Helping the oppressed in Syria requires a halt in fighting, so that Syria remains united and regains its status."

On Lebanon, Sayyed Nasrallah assured that Hizbullah is keen on stability, dialogue, and coexistence among all the Lebanese, which is demonstrated by actions.

On the accusations targeting the Resistance and claiming its involvement in the assassinations that took place in Lebanon, Sayyed Nasrallah emphasized these are completely baseless.
"We are keen on preventing strife and "Israel" is our only enemy. We have no enemies in Lebanon. Political divisions exist, but we do not view any camp as an enemy."

He went on to say "We have always believed that political dialogue and communication is the best way to solve national, economic, and social crises in Lebanon and we have not even once rejected dialogue."
Addressing those who have been rejecting dialogue, Sayyed Nasrallah said "We are ready to comply with the call to resume dialogue that was issued on November 29," reiterating "We oppose any preconditions imposed on dialogue, and strictly reject anyone treating us in a condescending manner over this issue, and will reply with our own way."

From Kiryat Shmona to Eilat

On the battle with the "Israeli" enemy, Hizbullah leader stressed should "Israel" wage a new war against Lebanon, the Resistance is ready to defend.
Sayyed Nasrallah assured that the Resistance in Lebanon does not need compassion as it already enjoys popular support.
He further elaborated that "Israel" could not tolerate some Fajr missiles hitting Tel Aviv during the 8-day "Israeli" assault on Gaza, questioning "How can "Israel" even consider attacking Lebanon when it will be met with tens of thousands of rockets that will rain down on Tel Aviv and other "Israeli" territories?"
Concluding his Speech, Sayyed Nasrallah addressed the Zionist enemy vowing "Let the "Israeli" leaders listen to this: the battle with "Israel" is not restricted to a 70 km distance, in fact it includes the whole of "Israel" from Kiryat Shmona reaching Eilat (settlements)."
Source: moqawama.org