Hours after the ceasefire between Gaza and the Zionist entity went into effect, disappointment prevailed "Israel" especially on the military level. 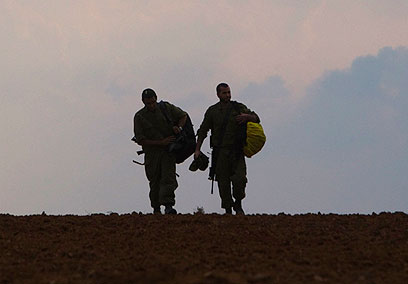 In details, the "Israeli" army began releasing on Thursday tens of thousands of reserve soldiers who were recruited under emergency orders during the "Israeli" aggression on Gaza.

According to "Israeli" Ynet daily, the soldiers were disappointed by the fact that the operation was short and the "Israeli" mission wasn't completed.
The soldiers feared that it is just a matter of time before they are called up again.
This comes as the ceasefire irked Southern "Israeli" settlers who under the mercy of the Palestinian resistance missiles.

Gal Margolis, one of the reserve soldiers, said "as a "resident" of Bir Sabea [Beersheba] there is a sense of disappointment. The violence will repeat itself and we'll find ourselves back here again and again. They [government] should have let us complete the mission."
Ovad Nissan, another reservist, reflected another sense of defeat: "There is a certain disappointment. We could have done more. I believe a ground force would have cleared the territory. The calm will not last."

Meanwhile, an opinion poll published by "Israeli" Channel 10 showed that 59% of "Israelis" are disappointed by the results of the military operation waged by "Israel" against the Gaza Strip.

They further opposed the cease-fire with Palestinian factions, while only 33 % expressed, their approval of the results.

The poll indicated that 34% of "Israelis" believe that the "Hamas" movement emerged victorious from the recent confrontation, while only 28 percent noted that "Israel" is victorious.

Moreover, 26 % expressed that both "Israel" and Hamas are equal.