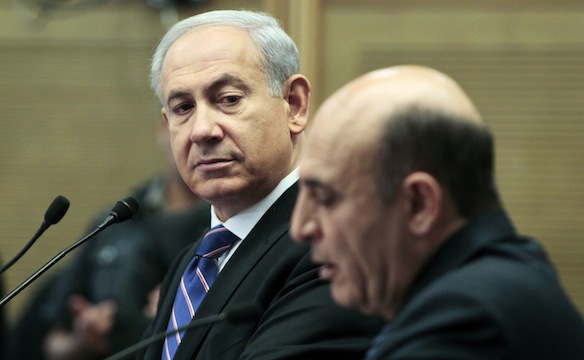 "In the last four years, Netanyahu has been busy with just one thing: bombing Iran," said MK Mofaz in his news conference.
In parallel, he said: "Nothing else interests him. Not society, not the economy, nothing; just a messianic urge to attack and bomb the Iranian nuclear project... Anyone who has been in the Prime Minister's Office knows that this has become an obsession with him."

Mofaz further warned "The merge between Likud and Yisrael Beytenu is a dangerous one."
"The irresponsible man has joined forces with the man who has no brakes. Bibi and Lieberman together. Bibi with the messianic belief in attacking Iran, and Lieberman, the man with no brakes, who threatened to bomb the Aswan Dam," the "Israeli" former war minister stated.
Moreover, he accused Netanyahu of "preparing for a nuclear spring for us and wants to embroil us in war."

"We mustn't let Netanyahu carry out this obsession," he added, urging Netanyahu's defeat, though pollsters see the government easily winning re-election in January.
Addressing Bibi, Mofaz said: "Mr. prime minister, you're creating panic. You are trying to frighten us and terrify us. And in truth - we are scared: scared by your lack of judgment, scared that you both lead and don't lead, scare that you are executing a dangerous and irresponsible policy."

It is worth mentioning that several current and former "Israeli" military and intelligence figures have come out against Netanyahu's war rhetoric against Tehran, saying such a move will backfire.