In the second part of his book, "Secrets of Lebanon's War" which will be released within the few coming days, the famous French journalist Alan Minarg revealed that the former president of the International Commission of Inquiry into the assassination of Lebanese former Prime Minister Rafik Hariri, Detlev Mehlis, spent a full week in the Zionist entity.

According to Minarg, Mehlis met Meir Dagan, the head of the Zionist intelligence- [Mossad] and officials of the "Shin Bet"- the "Israeli" Internal security service. 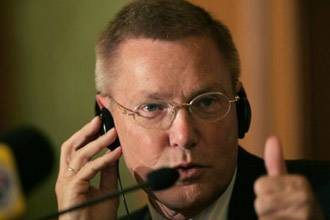 As a result, the two agencies devoted to the head of the International commission around 20 "Israeli" investigators with dual passports, to accomplish the task of investigating the assassination of former PM Hariri.
In his 600-page book, Minarg unveiled stunning historic facts about Lebanon. This included more than 500 documents that have not been published before in addition to hundreds of minutes of meetings, names, dates and exact details. Mehlis told the French journalist that he had received a telephone call from Kofi Annan, asking him to chair the International Commission into the assassination of Hariri. That was on Tuesday evening.
The German investigator asked the Secretary General of the Manhattan building to answer the next day. Mehlis immediately contacted his friend Judge Gerhard Lehmann, who is directly connected with the CIA. Lehmann advised him to agree.


The next day Mehlis informed Annan of his consent.

Mehils: When do I meet you?
Annan: You have to do some visits before we meet. First, Jacques Chirac [former French President]. Then, George W. Bush [former US President].

In Paris and Washington, Mehlis understood his specific mission: Syria killed Hariri. How to prove that? The answer is in Tel Aviv. In the capital of the Zionist entity, he spent a full week between Mossad chief Meir Dagan and Shin Bet officials. Around twenty "Israeli" investigators with dual passports were specialized to accomplish the task, that failed...
In parallel, Minarg mentioned in his book that Mehlis has acknowledged this failure. Before Hariri's assassination, there was the "Israeli" defeat in May 2000,and after the assassination, there was the July 2006 war. And between the three events, Minarg deals with the Guerilla fight that Hizbullah had professionalized.


The writer highlighted how the party succeeded in transferring the Vietnamese tunnel experience, how it hired former "Israeli" agents to dismantle Lahd Army's structure, and how it, in the writers opinion it revived the history of Lebanon.
The July 2006 war , to which the author dedicated the third part, is to him "linked to both: the 2000 liberation, and the assassination of Rafik Hariri in 2005."

The book further includes a historical study of the era that extends from 18 September 1982, the day Amin Gemayel met with Ariel Sharon and Yitzhak Shamir i.e. two days before he was elected as Lebanese president, to February 28, 1984 the date of Gemayel's arrival to the Syrian capital, Damascus. This visit came after a long conflict with the Syrian regime, after Lebanon's Mountain war, and the February 6 movement of that year.
In addition, the book uncovers great amount of secrets: What took place between the Lebanese and the "Israelis", the Sabra and Shatila massacre, Gemayel's election , the secret negotiations with the "Israelis", the formal negotiations, Walid Jumblatt's acrobatics between Damascus and Tel Aviv, Mountain war and errors of the Lebanese Forces' officials as they competed with each other against the Lebanese Army.
The first national dialogue conference in Geneva, and Beirut's fall on February 6, before returning the compass to Damascus are stations the book sheds light on.

However, the French journalist concluded by addressing the Lebanese officials : "When I recall your political positions along the different eras, I realize how much these are distant from principles."
" You are only motivated by self-interests," Minarg said.