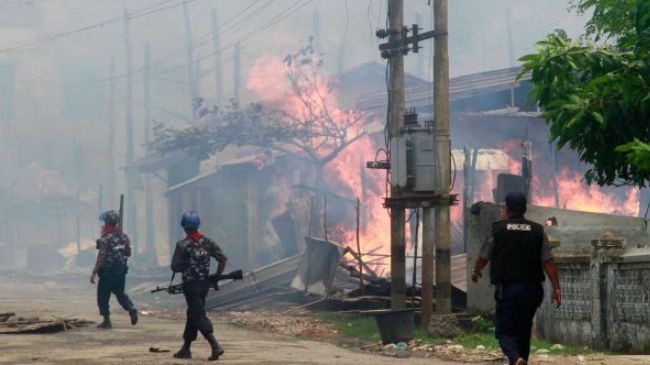 Regime-backed Buddhists up to the moment have continued burning Muslim villages and destroying mosques and property.
meanwhile, a curfew has been in effect since Firday, with major presence of army in Rakhine's capital, Sittwe.


The northern Rakhine state has been the scene of violence against Rohingyas since June 2011, leaving dozens dead and thousands homeless.

The Buddhist-majority government of Myanmar refuses to recognize Rohingyas, who it claims are not natives and classifies as illegal migrants, although the Rohingya are said to be Muslim descendants of Persian, Turkish, Bengali, and Pathan origin, who migrated to Myanmar as early as the 8th century.

Myanmar's President Thein Sein said on July 19 that Rohingya Muslims must be expelled from the country and sent to refugee camps run by the United Nations.
Reports say that around 650 Rohingyas have been killed, while 1,200 have been reported as missing and more than 80,000 have been displaced from the Western state Rakhine in recent months. 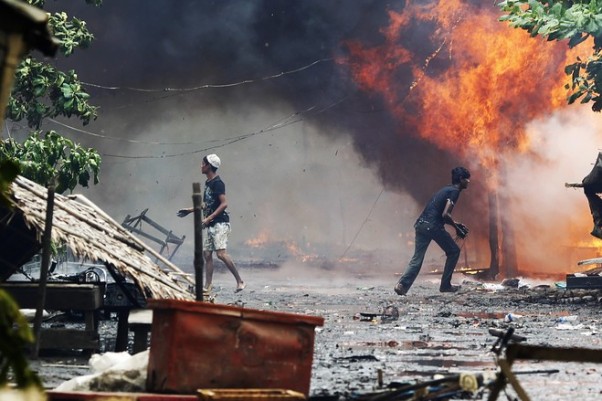 Myanmar was formerly known as Burma, with a population of more than eight million Muslims out of 55 million people. The rest of the population includes other minorities like Christians and Hindus as well as the majority of Buddhists.
The Muslims are the poorest of the population, despite the fact that Myanmar is considered fourth place in exporting rice in the world, in addition to maize, rubber, sugar cane, tea and wood because of the large forests it has.


Also, Muslims in Myanmar are not allowed to rebuild their demolished homes, as is the development of Muslim schools prohibited and not recognized by the government. The government does not acknowledge any certificate or degree from any Muslim school, and thus imposed the Buddhist culture forcibly.