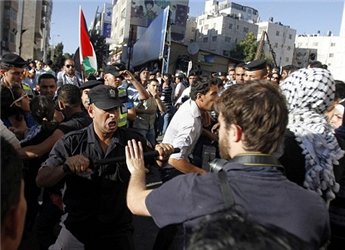 "We know that Mofaz will bring nothing new," said Wasl Abu Yosef, a member of Abbas' Palestine Liberation Organization, who told reporters of the postponement.
The meeting had been supposed to take place in the West Bank city of Ramallah. Former Palestinian minister Hassan Asfour said the postponement might have been prompted by a protest among Palestinian youths who did not like the idea of Mofaz, a former "Israeli" war chief, being a guest at Abbas' headquarters.

Dozens of young Palestinians later clashed with Abbas' security forces as they were attacked by security forces in their protest against the meeting. Abbas' Police attacked protesters with batons, beating and injuring at least seven people. Another seven protesters were taken to a police station along with at least two journalists.

Reuters photographer Saed al-Hawari was attacked and photographer Ahmad Musleh was arrested.
The forceful reaction to the protests drew criticism from some Palestinian officials who said the police were under standing orders not to intervene.