Iranian President Mahmoud Ahmadinejad asserted his country's readiness to negotiate with the Group 5+1 in the nuclear talks in Moscow, held from June 18 to June 19. 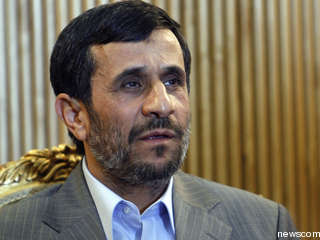 In an exclusive interview with German newspaper, Frankfurter Allgemeine on Sunday, Ahmadinejad stated, "Building confidence is a mutual issue and we should see what does the other side of the negotiating table does and if they take a positive step, we are all ready to cooperate and we hope to take concrete steps in Moscow."
Stating the official stance regarding the said Moscow talks, the Iranian President iterated his country is transparent as it had been during the talks held previously in Baghdad and Istanbul.
"We believe that all people should enjoy equal rights. We have always been looking for holding dialogue and we are still pursuing the same path," he further confirmed.
On this level, Ahmadinejad indicated Iran's hope that good results on mutual understanding would be reached as a result of the Moscow nuclear talks.

Also, the Iranian President underscored the events taking place in the region, stating that the conflicts in Syria, Bahrain, and Yemen "are all the result of the rule of single world order over the past century."
Upon question, Ahmadinejad noted that Iran has one constructive suggestion for Syria, Bahrain, and Libya, stating "We have made many efforts to draw the various Syrian groups close together and to pace the way for negotiations. We are ready to cooperate with everyone in line with supporting dialogue and elections in Syria."

However, President Ahmadinejad rebuffed the foreign interference in Syria, and how the atmosphere created in Syria by NATO members has undermined the possibility of talks in the country.