On the sidelines of the Shanghai Cooperation Organization (SCO) summit in Beijing, Iranian President Mahmoud Ahmadinejad met with his Russian Counterpart Vladimir Putin on Thursday, and discussed with him the Iranian nuclear program. 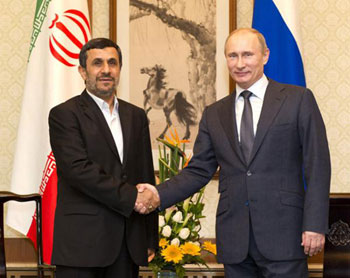 This brief meeting comes ahead of the upcoming global talks to be held in Moscow over the Iranian nuclear drive.
During the meeting, President Ahmadinejad called for a broader cooperation between Iran and Russia, in light of the developments taking place in the region and the world.
"Iran and Russia are now on the same side of the barricades," Ahmadinejad told Putin.

"There are people who stand against the progress and development of both Russia and Iran. Especially considering that now, NATO has set its sights on the east," he added.
Also, Ahmadinejad referred to the finalization of the Bushehr nuclear power plant, saying it resembles a symbol of cooperation between Iran and Russia.
For his part, Russian President stated, "We have always supported the right of the Iranian people to modern technologies, including the peaceful use of atomic energy."

"We are very strong supporters of the non-proliferation of nuclear weapons," AFP quoted Putin as saying.
"But we know your position and the position of all the Iranian leadership, which is that Iran is not working on the creation of a nuclear weapon. We are proceeding based on this," Putin went on to say during his meeting with Iranian counterpart.