"Israel's" Prime Minister Benjamin Netanyahu struck a surprise deal with the opposition "Kadima" party early Tuesday, drawing them into his government and jettisoning plans for a snap election. 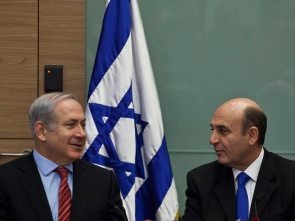 Kadima agreed to a deal in which Shaul Mofaz, who took over as party leader only six weeks ago, would become deputy prime minister and a minister without portfolio in the new cabinet, officials said.
The two leaders negotiated the deal even as the Knesset was voting through a motion to end its current session to clear the way for an early election Netanyahu himself had said he wanted. Details of the agreement were still to be finalized.
But according to reports, they included an understanding that "Kadima" would back Netanyahu in return for changes to a contentious law that allows ultra-Orthodox Jews to defer their military service.

Members of Kadima would also take up key positions including on the Knesset's foreign affairs, war and economic affairs committees.
The deal also involves Bibi's commitment to restart the peace process with the Palestinians and an agreement on the next "Israeli"budget.
The deal for a new unity government will be put to the Knesset on Tuesday, but it means that Netanyahu will be able to count on 94 votes in the 120-seat parliamentary assembly.
Zehava Galon, leader of the leftwing "Meretz" party, denounced the deal as a cynical political maneuver while Labor party chief Shelly Yachimovich slammed the "pact of cowards".
"This is the most ridiculous zigzag in the history of "Israeli" politics," she wrote on her Facebook page, stating that "with this final burial of "Kadima", we have received a rare and important opportunity to lead the opposition, and will do so with energy and faith."

The deal is a political coup not just for Netanyahu but also for "Kadima's" new leader Mofaz.

A hawkish former general and at one time army chief of staff, he is known to be a hardliner with tough stances on Iran.
Earlier, Mofaz had ruled out taking his party into a coalition with Netanyahu, whom he had recently called "a liar and "Israel's" worst PM."

Ahead of the "Kadima" March vote, Mofaz wrote that under his leadership the party wouldn't join Netanyahu's bad, failed and insensitive government."

On Sunday, Netanyahu had called for early elections, saying he wanted to avoid a
year and a half of political instability. Even on Monday morning, he told his weekly cabinet meeting that he wanted an election on September 4.
The new deal effectively cancels Monday's moves by the Knesset, "to clear the way for the election Netanyahu had said he wanted.