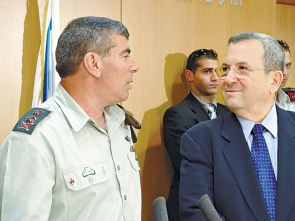 Barak leveled the accusations in a letter he sent to "Israel's" Attorney- General Yehuda Weinstein.
According to Barak, the crimes include forgery, conspiracy, obstruction of justice and giving and taking bribes.
In the letter, Barak also called to immediately publish his report into the "Harpaz" affair, which he claimed would reveal "harsh conclusions" regarding Ashkenazi's conduct.

"The draft report and the evidence it is based on paints a difficult picture including a series of crimes," the Barak wrote.
In response, Ashkenazi's associates hit back at the War Minister.
"This is a miserable attempt by Barak to generate media spin, in order to prevent an investigation into the disappearance or destruction of all the tapes and documents related to the "Harpaz" incident from his office," an Ashkenazi aide charged. "The accusation that Ashkenazi took bribes is ridiculous and delusional. Something very bad is evidently happening to the "defense" minister."

Earlier on Sunday, Weinstein confirmed reports that his office is considering opening a criminal investigation into the so-called "Harpaz" affair.
Weinstein said that his office would need to review the material and would then decide whether to open a formal criminal probe.

The "Harpaz" affair is named for "Israeli" Col. Harpaz, a former Military Intelligence officer who allegedly forged a document detailing a strategy of how to get former OC Southern Command Maj.- Gen. (res.) Yoav Galant appointed chief of staff in place of Ashkenazi.

Barak wanted Galant for the post, while Ashkenazi was believed to have wanted a fifth year in the job for himself.