"Israeli" Knesset Member Shaul Mofaz emerged as the new chairman of Kadima Tuesday night, as the party's sluggish primaries gave way to a change in its leadership. 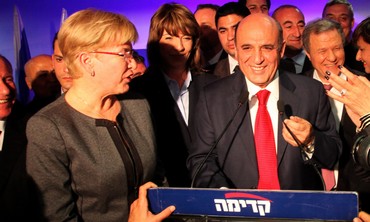 With over 90% of the votes in, it appears that Mofaz - who lost the previous Kadima primaries by a narrow margin - won 62% of the votes, while current Chairwoman Tzipi Livni lagged far behind with 38%.
"This vote is a vote for the future of "Israel"," Mofaz told reporters in his campaign headquarters earlier Tuesday. "I feel confident... Despite the low voter turnout I can feel the support in me constantly growing."

Mofaz is set to become Kadima's fourth chairman after Ariel Sharon, Ehud Olmert and Tzipi Livni.
Around 1 am, Tzipi Livni told reporters that she called Mofaz and congratulated him on his victory. She refused to take any questions.
Sources in Livni's campaign expressed great disappointment over the results, but stressed that they will recommend she refrain from making any drastic decisions.

According to "Israel" "Ynet", sources close to Livni estimated that the former party leader will soon announce her retirement from politics.
"I'll see you sometime, somewhere," she told her supporters on Tuesday night after losing the vote.

"She realized it was over after she saw the results," a source close to Livni said. "She said she understood she had missed her calling."