Iranian President Mahmoud Ahmadinejad criticized the US policies on Afghanistan, believing they are the source of all troubles sweeping across the country. On this level, President Ahmadinejad stressed that the time has come for the US to change its hostile policies towards all nations of the region.

"Incorrect policies of NATO forces and above all those of the US are the main cause of crises in Afghanistan and similar countries", the Iranian President Ahmdinejad stated in the fifth Regional Economic Cooperation Conference on Afghanistan (RECCA-V) held in Tajikistan's capital on Monday.
"NATO member states, particularly the US, should change their hostile policies towards nations and avoid humiliating them by respecting them", Ahmadinejad asserted. 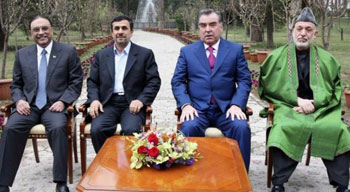 Moreover, he iterated that the NATO states are "prolonging their presence in the region under the pretext of combating terrorism", while their real goal is to encircle the whole strategic region. Ahmadinejad underscored the effect of the NATO interference, especially regarding the spread of insecurity in Afghanistan, Pakistan and neighboring countries.
"The world needs a new order based on which rights of nations will be observed", the Iranian President added.

This comes in a two-day gathering that started on Sunday in Dushanbe, Tajikistan, as nations kick off the third International Nowruz Celebrations, which mark the first day of spring.
On Sunday, President Ahmadinejad held a joint meeting with his Tajik, Afghan and Pakistani counterparts Emomali Rakhmon, Hamid Karzai and Asif Ali Zardari. During the Sunday meeting, President Ahmadinejad urged all countries of the region to strengthen their relations, because the common enemies of all nations have reached "stalemate."

"Common enemies of regional nations are faced with many woes and internal and foreign issues while they are in conflict with each other. They have reached a deadlock", Ahmadinejad went on to say. He further asserted that this issue is able to help the regional nations to get rid of the interference of foreign countries.
After the meeting, presidents of the aforementioned four countries emphasized that joint cooperation should be the most effective solution to the dilemmas in the region.