During his official visit to Iran which kicked off Saturday, Lebanese Defense Minister Fayez Ghoson met with top Iranian officials, and discussed with them bilateral relations, in addition to the latest developments in the region.

On Sunday, Minister Ghoson met with Iranian President Mahmoud Ahmadinejad and discussed with him the latest regional developments, in addition to ways that would help develop bilateral relations. Ahmadinejad on his part stated that Tehran and Beirut should work towards achieving unity in order to confront the arrogant west and "Israeli" enemy. 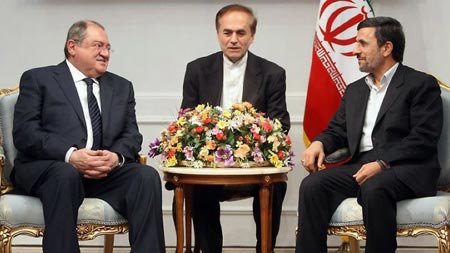 "The goal of arrogant powers is to save the Zionist regime, but they will certainly not fulfill this wish of theirs, because the world has changed and their era has some to an end", Ahmadinejad stated during his meeting with Minister Ghoson.
"The Zionsit regime is an evil and inhumane creature that will massacre all regional nations is it is given the opportunity", the Iranian President stressed.
On his part, Minister Ghoson praised the Iranian nation's resistance against the "Israeli" aggressions, affirming that "today Tel Aviv will think twice before attempting an invasion anywhere in the world for fear of the Islamic Republic".

Also on the same day, Ghoson held talks with his Iranian counterpart General Ahmad Wahidi who on his part affirmed that strengthening Lebanon's army is one of Iran's strategic policies.
"Lebanon must have a strong army to defend its interests in the region", Wahidi stated during his meeting with Ghoson.

Moreover, Wahidi stressed that his country's policy is based on deepening regional convergence, and improving security and stability in the Middle East. "We consider safeguarding Lebanon's security an important part of stability in the region", Wahidi asserted.
Lebanon's Defense Minister then praised the Iranian stances regarding the Lebanese resistance and army, especially during the 33-day July war, further hoping that cooperation between both countries would increase.

Furthermore, Minister Ghoson also met with Iranian Foreign Minister Ahmad Salehi who asserted that solidarity and resistance are the two elements which guarantee peace and stability in Lebanon. 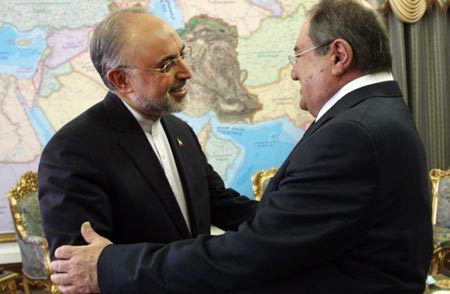 Salehi further pointed out Iran's policy to promote peace and stability in Lebanon, and stressed the need for further Tehran-Beirut cooperation, particularly the field of defense.

In addition, Iran's Foreign Minister warned against the enemies' conspiracies to spread discord and politico-religious tensions in the regional countries including Lebanon. In this context, he stressed that the most important challenge now facing the Muslim world is the failure to form a united front against threats made by the Zionist entity.

On his second day of the official visit to Iran, Monday, Minister Ghoson met with Iranian Secretary of the Supreme National Security Council Saeed Jalili, who stated that Lebanon is a pioneer Arab country in defeating the "Israeli" enemy.
"The [...] Lebanese nation, by supporting the resistance movement, [achieved] the victory of an Arab state against the Zionist regime for the first time", Jalili affirmed.

Moreover, Jalili affirmed that as a result of the "Israeli" defeat, "the regional balance is changing in favor of Lebanon and to the disadvantage of "Israel"", further praising Lebanon's role in resisting the enemy.
On his part, Lebanese Defense Minister noted that the Lebanese resistance is seen as an obstacle in the way of arrogant powers, and therefore the latter struggle to counter it.