Iranian President Mahmoud Ahmadinejad stated that the enemies of Iran fear the progress of the Iranian nation with its rich and ancient culture, history and civilization, Press TV reported. 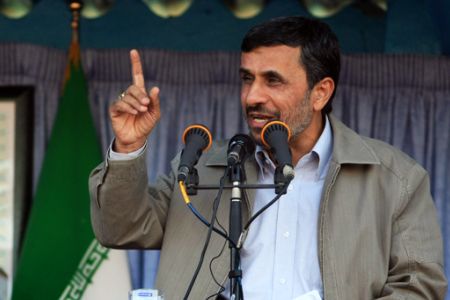 In a ceremony held for the inauguration of six construction projects in the southeastern province of Sistan and Baluchestan on Monday, President Ahmadinejad stated, "All plots hatched by enemies are aimed at hindering Iran's progress because they are fearful of our country's development".
"Iran, which is advanced in economic and scientific fields, would turn into a major obstacle against arrogant and hegemonic powers", the Iranian President further added.

Moreover, he indicated that the arrogant powers gain the oil of the countries in the region, and in return, they give billions of dollars-worth weaponry.
On this level, President Ahmadinejad went on to say that the said weapons are used for destruction, adding that the regimes in the Persian Gulf receive weapons for their oil only because they are too weak to stand up to the arrogant western powers and the Zionist enemy.

Also, the Iranian President warned that the distribution of weapons in the different Persian Gulf countries aims at inciting strife among them, and making the atmosphere suitable for the enemy to take over.

In this context, Ahmadinejad reaffirmed the importance of resistance movements against the powers that do not seek the dignity and welfare of other nations.