Iranian President Mahmoud Ahmadinejad confirmed that the arrogant powers of the world, meaning the US and its allies, seek to wage war in the region, in an attempt to topple the Islamic resistance. 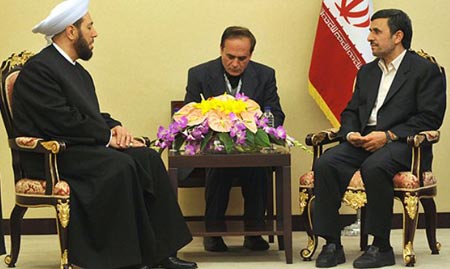 The Iranian President made his remarks on Wednesday after receiving the Syrian Grand Mufti Sheikh Ahmad Badreddine Hassoun.
Also, Ahmadinejad stated that "the main purpose of the hegemonic and bullying powers is to salvage "Israel", and they do not seek the prosperity of nations and merely take advantage of every opportunity against the regional people".

Moreover, he noted that the regional nations are in need to stand up to the hegemonic powers through maintaining their unity.
President Ahmadinejad also criticized rulers of some regional countries for their support of the Western powers in their domination task.

"The hegemonic powers managed to advance their policies with the help of these rulers", the Iranian President further added.
On his part, Syrian Mufti Hassoun praised the Islamic Republic of Iran's policies, and hailed Iran for being a symbol of unity and solidarity in the Islamic World.