According to the Central News Agency (CAN), General Prosecutor of the Special Tribunal for Lebanon (STL) Daniel Bellemare will be visiting Beirut next week. CAN sources noted that Bellemare would be meeting with Lebanese President Michele Suleiman, PM Najib Mikati, Interior Minister Marwan Charbel, and Justice Minister Shakib Qortbawi. 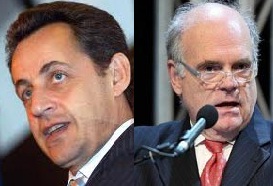 On another hand, the agency added that French President Nicolas Sarkozy has expressed his desire to visit Lebanon to hold talks with top Lebanese officials.
Also, the agency indicated that Sarkozy has informed Lebanese officials about his wish to visit Lebanon, which would most probably be scheduled on the sidelines of Lebanese PM Mikati's visit to Paris in February, at the invitation of his counterpart Francois Fillon.

Among the issues expected to be discussed between the Lebanese and French officials are the bilateral relations, and the future of the UNIFIL peacekeeping troops in south Lebanon, especially after the recent attacks against the French battalion.