World soccer body FIFA has asked Bahrain for full details of the detention in early April of Bahraini soccer players during anti-government protests earlier this year in preparation of an investigation into whether the government has interfered politically in the sport. 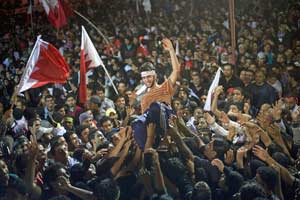 Disclosure of the request comes two months after three national team players were detained and some 150 others athletes, coaches and referees were suspended for their alleged support of the protests. FIFA said the request was made in May.
One of the soccer players, Mohammed Hubail, was sentenced this week to two years in prison on charges of attempting to topple the Bahraini monarchy and having links to a foreign terrorist organization.

Hubail was tried behind closed doors in a Bahraini special security court set up under martial law. Eight of his co-defendants were jailed for life while 10 others were sentenced to 15 years each.

FIFA could suspend Bahrain if an investigation were to conclude that the government had intervened for political reasons in the Gulf Island's soccer. It could also could jeopardize Bahrain's participation in the next round of Asian Olympic qualifiers which begins in September.

The group, Bahrain Youth Society for Human Rights, said the clubs had been suspended because they had stopped playing during the protests because they felt it was too dangerous and also in honor of protesters killed in the government's crackdown.