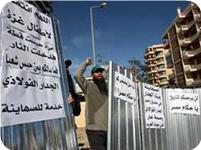 86 members of the International Union of Muslim Scholars state that the steel wall and the closing of the Rafah crossing are illegal. The Scholars also stressed on their disapproval of the Islamic Research Center's decision in Al-Azhar over building the wall.

The scholars further declared, in a statement titled "Al-Azhar ... Between the Wall and Shame", that because of their fear from God, and their duty towards their nations, they declare the prohibition of building of the wall and closing the Rafah crossing.

The Muslim Scholars considered that when Al-Azhar stated its approval of building this wall, it turned back on its noble message, where it approved on the crime of building the wall. The union further referred that the Al-Azhar's decision is not out of knowledge, for it was not presented with research, nor was it presented with opinion, with the names of who is with and who is against.