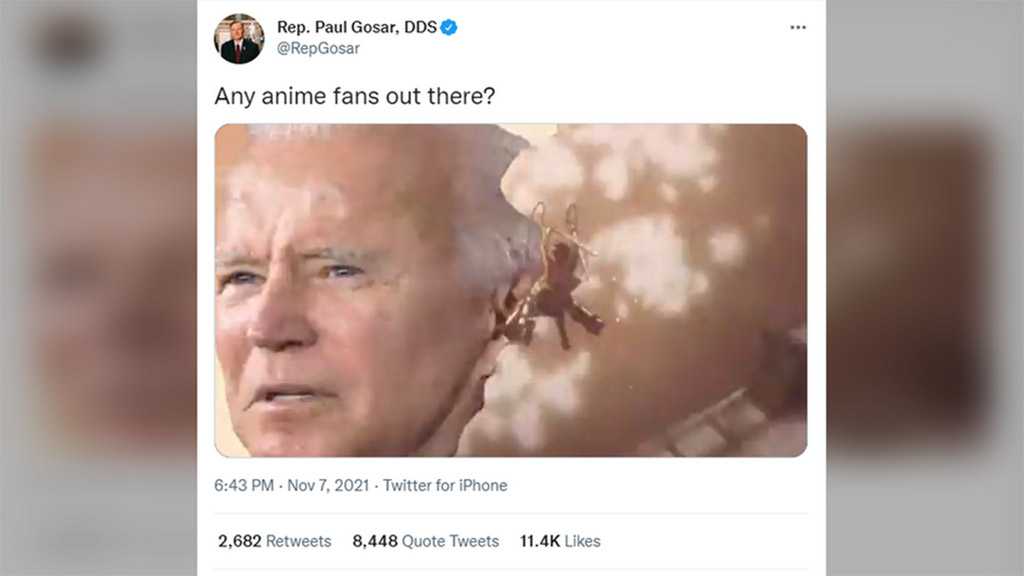 “Threats of violence against members of Congress and the president of the United States must not be tolerated,” Pelosi said on Tuesday in a Twitter post. She urged House minority leader Kevin McCarthy [R-California] to join her in condemning the “horrific video” and calling for criminal and House Ethics Committee investigations.

At issue is a video that Representative Paul Gosar [R-Arizona] tweeted on Sunday with a picture of his face photoshopped onto a character from the anime show ‘Attack on Titan.’ Gosar’s character is shown attacking monsters with the faces of President Joe Biden and Representative Alexandria Ocasio-Cortez [D-New York] edited onto them.

The viral video drew backlash from Democrats, including Ocasio-Cortez, who called Gosar a “collection of wet toothpicks.”

“White supremacy is for extremely fragile people and sad men like him, whose self-concept relies on the myth that he was born superior because deep down, he knows he couldn’t open a pickle jar or read a whole book by himself,” she added.

Other members of Congress, such as Representative Ted Lieu [D-California], called for Gosar to be expelled from the House or lose his committee positions. At least one Republican, Adam Kinzinger [Illinois], said the GOP should condemn the video. Representative Cori Bush [D-Missouri] called Gosar a “white supremacist clown.”

However, Pelosi’s call to action took the response to another level, suggesting that the Arizona Republican may have committed a crime with his anime parody.

Democrats have increasingly tried to criminalize mockery of their leaders. In fact, NBC News earlier this month suggested that engraving the anti-Biden “Let’s Go Brandon” meme on a gun part might represent a security threat against the president. A CNN analyst likened the meme to rhetoric from the Wahhabi Daesh [Arabic acronym for “ISIS” / “ISIL”], Nazis and the Ku Klux Klan.

Gosar mocked the outrage over his video, tweeting another meme on Tuesday. It showed a crying Wojak figure saying, “Your cartoon anime scares me with your jet pack flying and light sabers.” A calm-looking Yes Chad meme replies, “It’s a cartoon. Relax.”