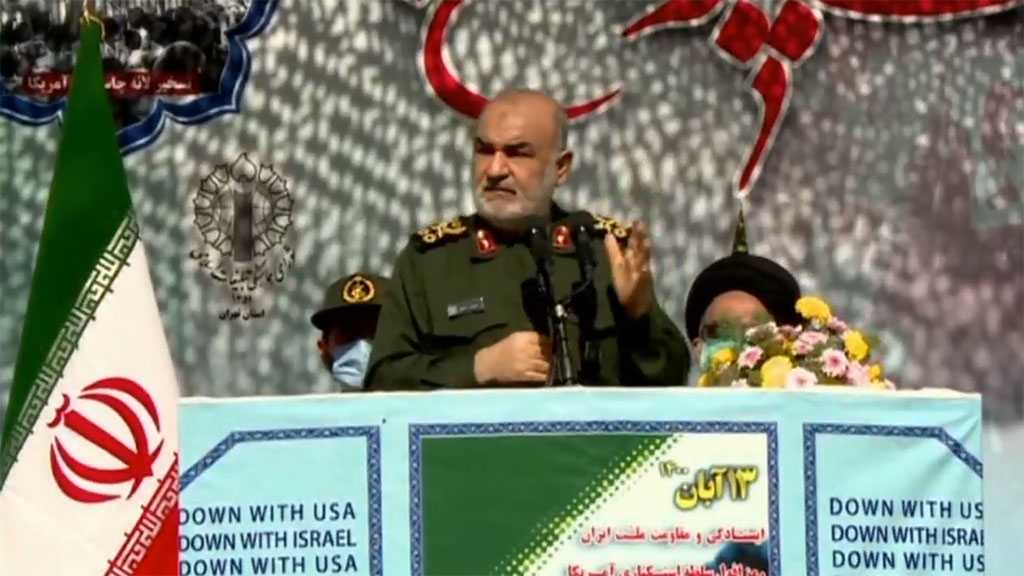 Chief Commander of Iran’s Islamic Revolution Guard [IRG], Major General Hossein Salami, labelled the US as the manufacturer of dictatorships all over the world, while stressing that Iran represents the haven of peace in the region.

In remarks during the commemoration ceremony of the National Day of Fight against Global Arrogance, which was held in front of the former US embassy in Tehran, now referred to as the Den of Espionage, on Thursday, Salami said “The Americans are used to being defeated at the hands of the Iranian nation, but, they have yet to learn the lesson.”

Aban 13, which is reminiscent of November 4, 1979, is the day when Iranian students stood against the United States' arrogance and hegemonic power, and seized the US Embassy in Tehran.

"Today is a day of victory for the Iranian nation and overcoming the greatest empire in history,” Salami said.

He stated that on November 4, 1979, when the United States was at the peak of its political, military and economic power and the Iranian nation had not created the great structures of its current power at the beginning of a glorious Islamic Revolution, a glorious Islamic revolution was formed under the leadership of the late Imam Khomeini.

"This courage and endurance in the atmosphere of that day in the world is one of the most amazing historical facts both for humanity and for the Iranian nation," Salami underscored.

Addressing the revolutionary people of Tehran who participated in the massive rally, Major General Salami said that today is a great day for the Iranian nation.

Referring to the anniversary of the seizure of the former US Embassy in Iran in 1979, Salami added that on this day, the United States, which was the greatest empire in history, was defeated.

“The Americans are used defeats at the hands of the Iranian people, he added that however, they have not yet embraced a lesson,” he added.

Salami also slammed the US hegemonic moves to provoke wars in the world, saying that more than 40 major wars in 40 parts of the world are the outcome of the US politics in the world.

“The US has engaged in a war with many countries in Europe, Africa, South America, the far East, West Asia, and Russia,” Salami said, and “the US waged wars that have left more an 8 million dead in the world.”

He also noted that 750 US military bases in the world have each tried to establish pervasive political domination in the world with a circle of political influence.