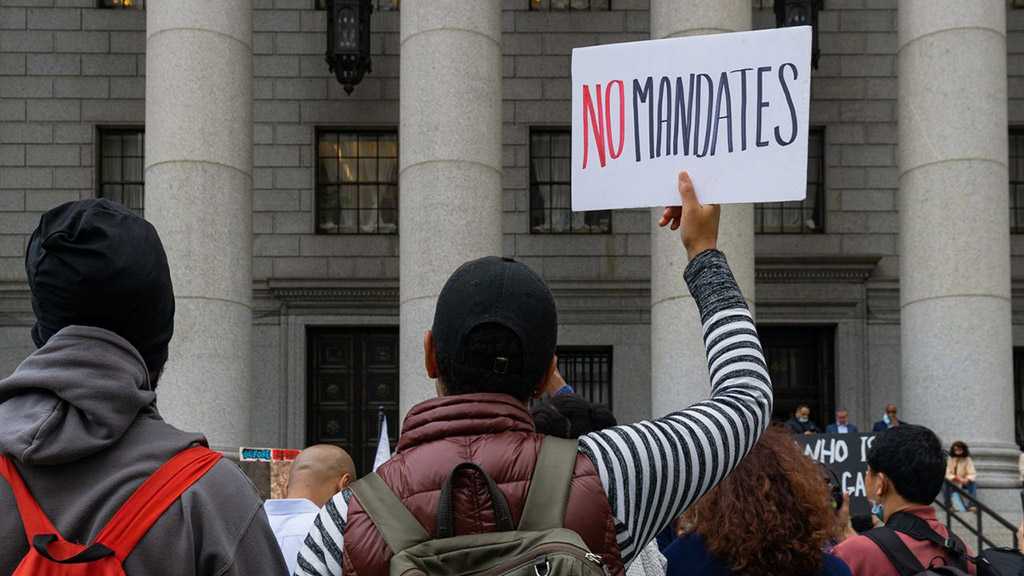 Thousands of New York police, firefighters and other city employees took to the streets to protest against Mayor Bill de Blasio’s COVID-19 jab order, marching across the Brooklyn Bridge and blocking off traffic.

Footage of the protest posted Monday on social media shows long streams of workers marching across the bridge from Brooklyn to Manhattan, shutting down traffic. The clips show the demonstrators chanting as they walked with such messages as “F**k Bill de Blasio,” “Hold the line,” “No vaccine mandates,” and “Wake up New York.”

Many of the protesters held American flags, including one so large that it stretched across almost the entire width of the bridge and took about a dozen people to carry it. Other chants included “We the people will not comply,” “F*** Joe Biden,” and “Let’s Go Brandon.”

The demonstration reportedly began at the New York Fire Department’s headquarters in Brooklyn and ended at City Hall in Manhattan. It was billed as an anti-mandate protest for an estimated 50,000 New York City employees who haven’t yet been vaccinated against COVID-19.

Another clip showed workers gathering on the Brooklyn side of the landmark bridge, blocking streets in the area. They carried signs with such messages as “Coercion is not consent,” “Workers are essential, mandates are not,” and “Danger, you are being conditioned to view your freedom as selfish.”

The march came one day after anti-mandate demonstrators breached security barriers outside the Barclays Center arena and stormed the entrance before the Brooklyn Nets’ NBA game. The team has suspended star player Kyrie Irving for refusing to comply with the city’s vaccine requirement for all people entering major indoor venues, such as sports arenas.

De Blasio said last week that all city employees who haven’t received at least their first COVID-19 jab by November 1 will no longer be paid. “It’s time now,” the mayor said. “If you don’t want to get vaccinated, you’ll be put on unpaid leave.” He added that many first responders consider their work a calling, and “the vast majority of human beings go to work to get paid,” so he expects the mandate to persuade the vast majority of municipal employees to get vaccinated.