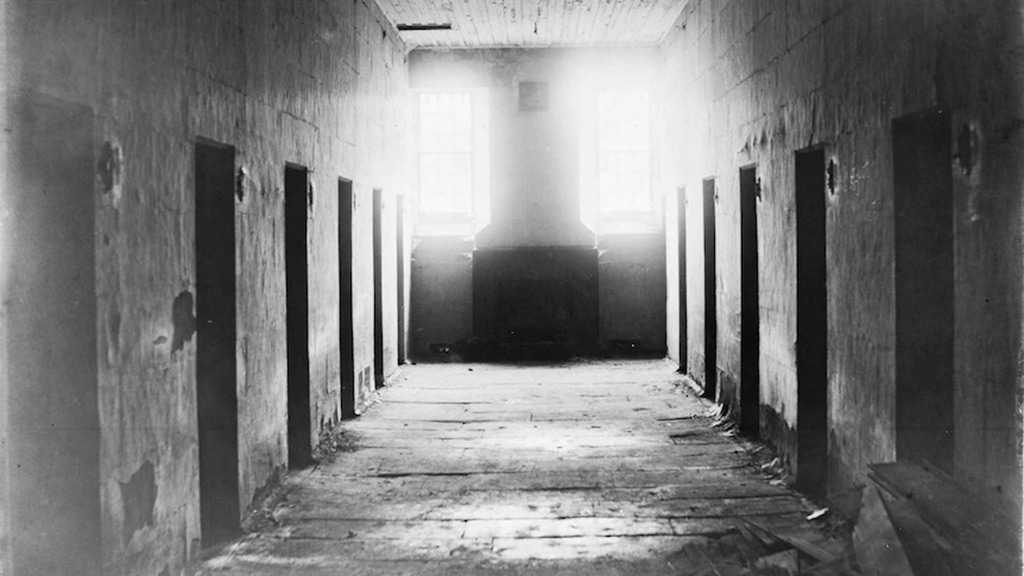 Samer Sema’an, a lawyer of Addameer Association, said after meeting Nabil Al-Moghayer who is one of the 14 detainees in Al-Naqab prison, that the detainees are suffering from extremely harsh conditions amid collective punishments “that amount to torture”.

They were taken back to Al-Naqab prison and confined to section six into cells that are unsuitable for human use, devoid of their personal belongings, nearly ten days after setting the section on fire and separating the Islamic Jihad detainees and transferring them to Ella and Al-Naqab prisons. This happened after six detainees broke free from Gilboa prison.

The 14 detainees are now completely isolated from the outside world, as they had not been visited by the Red Cross or any party before Addameer lawyer visited them, noting that 5 other detainees are isolated in other cells in Al-Naqab prison.

Al-Moughayer describes the cells where the detainees were confined to as “a cave”. Every two detainees were locked up in an empty room with charred walls, floor, and iron parapets. The smell of fire in the dark rooms is very harmful to the detainees. They don’t have any clothes, mattresses or blankets, and the prison administration brings a mattress and a blanket for each detainee after midnight around 12:30 a.m., and then takes them away before sunrise at 6:00 a.m., “And whoever wants to sleep after that, lies on the on the worn-out iron railing”.

The detainees are exposed to extreme cold at night. They had asked the prison administration for jackets, but in vain; this led to complications for their illnesses due to the severity of the cold, but the administration didn’t transfer any of them to the clinic. To rub salt into the wound, the windows of the cells are without glass, “which allows reptiles and insects to enter”.

Al-Moughayer also complains about the poor food quality provided to them and that they are prevented from entering the canteen and deprived from cigarettes and detergents, as well as toothpastes and toothbrushes. “They had returned the food back more than once in protest, but to no avail.”

The cells contain a toilet and a washbasin for the detainees to drink from, but the shower is outside the section. If a detainee wants to shower, the guards take him, handcuffed, to take a bath and return. Only five days earlier, the administration brought shampoo from section seven and new clothes for every detainee. Al-Moughayer added that they don’t go out for the usual break, but rather every two detainees are taken out, handcuffed, for only one hour into an area of 3*6 meters surrounded by a fence like a cage.

According to Al-Moughayer, the detainees are witnessing “unprecedented confinement conditions” that go against the Prisons Law, for they haven’t been referred to the courts, nor were they charged or notified about how long they will stay in isolation and no one from the administration contacted them. He further pointed out, “The administration indirectly accuses them of being the main ones responsible for burning the section”, and that “any action on their part will be confronted fiercely”. The period of isolation included whipping of two detainees in the waiting rooms, after they were handcuffed “provocatively” and transferred to the rooms for a week.

In addition to the confined detainees in section six, there are 5 detainees in isolation cells in al-Naqab. They had been isolated for a week after six detainees broke out from Gilboa prison, claiming they have something to do with the “escape”. Their isolation was extended twice, in which the second time lasted till 20/10/2021 under “abnormal and illegal conditions”, as detainee Tamim Salem said in his meeting with the lawyer of Addameer Association.

The five detainees live under hard circumstances, as they stay shackled and handcuffed when they are let out into the courtyard that “resembles an ironic box of 3*3 meters”. They also suffer from an extremely hot weather during the day and a cold weather at night. One of them got a sprain in his back as a result of his movement as he was being handcuffed; three other detainees went on a four-day hunger strike. They stopped the strike after improving the canteen and to avoid with the prisoners’ collective plans.

Addameer Association condemned the collective punishments and the blatant rights violation the detainees had gone through. It called on human rights and international institutions, first and foremost the Red Cross, to stand up to guarantee the rights of the detainees, by visiting them, knowing their conditions and lobbing with all the possible means to lift the collective punishments that degrade their dignity and undermine their humanity.