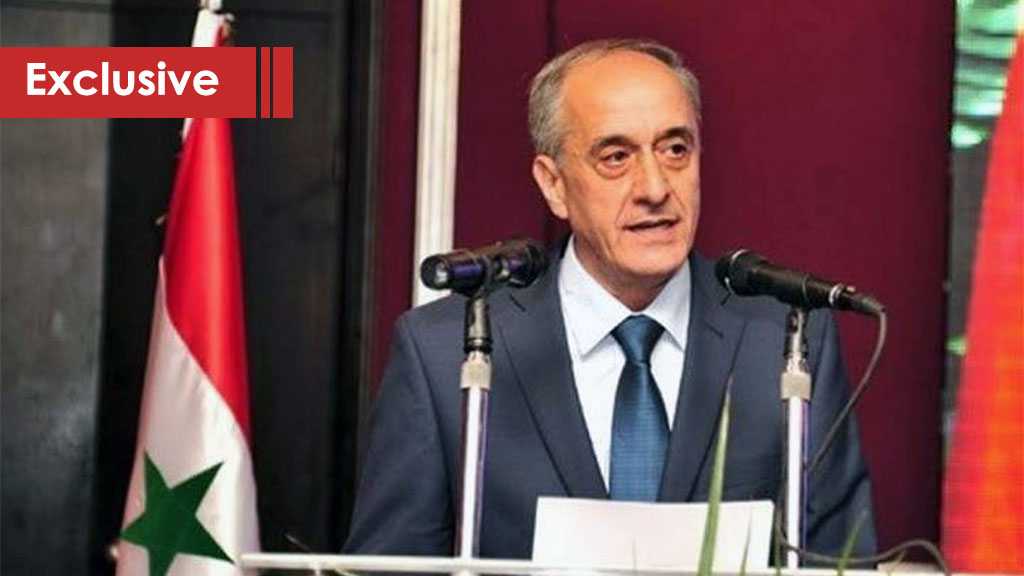 Damascus - After several consultative meetings between the Syrians and the Jordanians and following official Syrian visits to the Jordanian capital Amman, a phone call was made between Syrian President Bashar Al-Assad and Jordanian King Abdullah II.

During the call, they discussed bilateral relations and enhancing joint cooperation for the benefit of the two countries. As signs of Arab openness towards Syria begins to appear from its neighbors, what is the Syrian position regarding these diplomatic developments and events?

Syrian Deputy Foreign Minister Dr. Ayman Susan spoke to Al-Ahed News website about all the recent diplomatic developments, stressing that "the project that was prepared for Syria is faltering and its fate is certain failure, and the changes that are taking place in today's relations between Syria and other countries are a new indication of the changing scene. This does not apply to Syria only, but to the regional and international situation in general, as the desire to create a calm atmosphere on the international arena is noted because the reality of the world is very complex.”

According to Susan, "the American-Russian meeting between Presidents Putin and Biden in Geneva is what paved the way for a calm atmosphere, and the ongoing meetings between Russian and American officials will lead to breakthroughs on the international scene, including our region, which will certainly be reflected in the return and consolidation of stability. This is in the interest of international peace and security. If there is a change towards Syria, the credit goes to Syria’s victory over the conspiratorial Western project, which aimed to re-engineer the region in general in a way that serves “Israel’s” interests.” He stressed that “America looks at the region with “Israeli” eyes, but the final word was for Syria and its allies as well as for the axis of resistance."

Speaking to Al-Ahed, Susan said, "What America wanted for this region has failed, and it must realize that the time of pressure and hegemony and imposing dictations and conditions on countries is over. Today, there is an international system in the making, especially with the growing rise of Russia on the international arena. Also emerging international and regional powers no longer accept the imposition of the American will and control of the fate of the world. Our Russian partners and Iranian brothers are partners in the victory over terrorism, without neglecting the great role of the Lebanese resistance in supporting the efforts of the Syrian Arab Army in defeating the terrorists. This paved the way for the final stage of achieving the final victory.”

"The Syrian government adopts policies that serve its people and its interests, not to please one party or another."

Regarding the US occupation in Syria, Susan confirmed to Al-Ahed that "it is linked to the scheme that Washington wanted, and with the defeat of this scheme, the American presence began to lose its usefulness. We may see at any moment the exit scene of American forces similar to that in Afghanistan."

Susan stressed that "the developments in Syrian-Jordanian relations, the numerous meetings between officials of the two countries, whether in Amman or New York, and yesterday’s phone call between President Bashar al-Assad and King Abdullah II, is how the normal state of relations between the two brotherly countries should be. Some talk about an American green light. There are signs that some people seize in order to change the approach. But there is a change in the international atmosphere and this has become clear, and all of this paves the way for a new stage that will see the return of relations between Syria and other Arab countries. The return of this communication is a main result of the victory over terrorism.”

“Syria builds its foreign policies on foundations and principles that do not change due to a specific political circumstance or a specific situation,” said Susan. “Based on these constants, Syria is addressing its relations with its Arab brothers, which it hopes will lead to reforming the current Arab situation so that we can face the imposed challenges.”

“One of the goals of the war on Syria is the idea of Arabism because the West wants to fragment the Arab nation to ensure “Israel’s” dominance over the region, and we all have to move to build an Arab reality that provides immunity for all the countries in the Arab world.”

Susan pointed out that "American politicians should go back to reading Wilson's principles and constitutional theorists in America and the world and realize that the political decision in any country in the world is for the people of that country. It does not dependent on the will of this or that country. Therefore, the Arab discourse is legitimate because the dangers that the region is exposed to must push the Arab countries to strengthen the common ties that exist between them in order to confront these challenges, and the deepest common denominator is the idea of belonging to Arabism.”

Regarding Syria’s seat in the Arab League, Susan indicated to Al-Ahed that “Syria did not leave the League for it to return, and the decision to suspend its membership was a major legal mistake. In its charter, there is no procedure for suspending the membership of a state without unanimity. Therefore, Syria's membership was suspended due to a legal error and as a result of a specific political circumstance. When this error is corrected, the political changes mature and things will return to normal, and when there is a warm Arab stance towards Syria’s return to occupying its seat in the League, this will be a great gain for the Arabs.”

He added, "The Kingdom of Saudi Arabia and Iran are major players in the region, and that good relations between the countries of the region will be reflected in achieving stability. Saudi Arabia is a brotherly Arab country to Syria. There are certain circumstances related to what Syria has been subjected to and the relations have reached to what they are today. But Damascus has not antagonized anyone and did not take any action against anyone. It looks forward to the future and does not pay attention to the past and does not deal with its brothers with the logic of hatred. We hope and want that the situation among the Arab countries to be in the best condition.”

The Syrian Deputy Foreign Minister, Dr. Ayman Susan, concluded his interview with Al-Ahed by stressing that "the next stage is the stage of restoring relations with the brotherly Arab countries, and there are declared and undeclared communications. All of this will lead to the existence of a sound and healthy Arab reality that enables this nation to possess the cards of power through which it can protect its rights and defend itself from any external interference.”