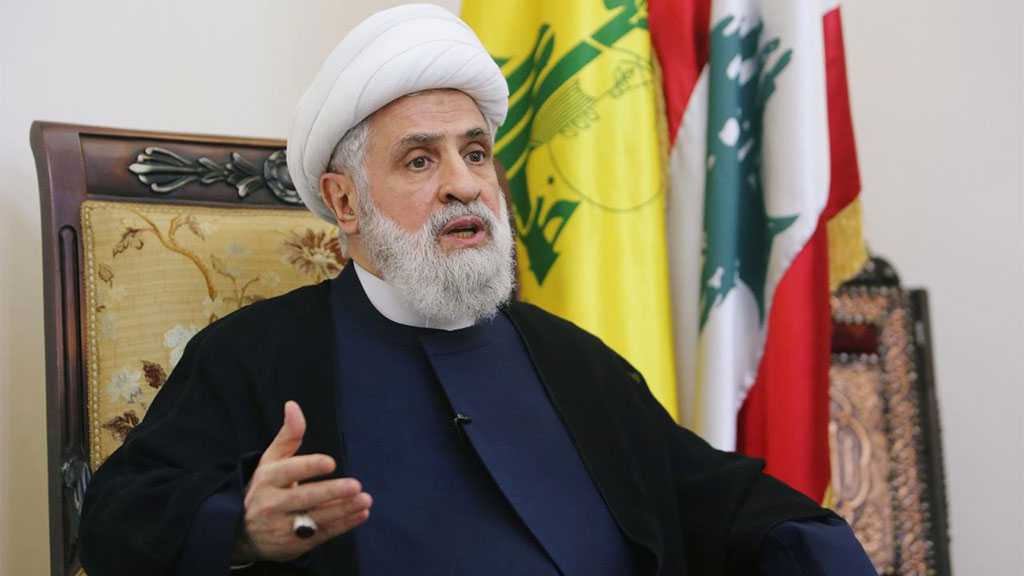 Hezbollah Deputy Secretary General His Eminence Sheikh Naim Qassem warned that “Any ‘Israeli’ attack on Lebanon will be met with a response from Hezbollah. Even if [Lebanon] is dragged to a war, we will face this war. Our weapons are loaded. If we need more [weapons] - we have our ways to rearm ourselves.”

In an interview with Al-Manar TV, Sheikh Qassem added: “We are waiting for the Lebanese government’s position on the indirect negotiations with [the ‘Israeli’ enemy] regarding the border issue, and when our turn arrives, we will do our duty.”

On another level, His Eminence announced: “If the companies and the central bank don’t take action to secure the country's fuel needs, we will continue to bring in petroleum products. Hezbollah is ready to bring in diesel through official border crossings, but some in the country are afraid of the US and its sanctions.”

Sheikh Qassem also reiterated that “the Iranian diesel that entered Lebanon is a national commodity.” He revealed that “the quantity requested by the Lebanese merchants is about 25 million liters,” and he pointed out that “the balance of power is what brought Iranian diesel to Lebanon.”

“I want to ask those who talk about sovereignty how some parties and associations receive their American support.”

Meanwhile, His Eminence highlighted that “Hezbollah's stock is very important at the level of the whole country, and the party has allies from all sides and within all groups.”

“Those who oppose Hezbollah have a problem with the party because it presented a model in resistance and succeeded in social and political work,” he added.

Sheikh Qassem further blamed “the absence of economic plans, corruption, and American sanctions for leading the country to this state.”

“The Iranian diesel that passed through Syria broke the most important siege on Lebanon in its entire history,” he said, noting that “Iranian diesel elicited an American decision approving the import of Egyptian gas to Lebanon through Syria.”

The Hezbollah Deputy Secretary General also stressed that “the confusion that occurred among the Americans and their scramble to find solutions was caused by Iranian diesel.”

He explained that “the nuclear negotiations, according to the directives from [Leader of the Islamic Revolution His Eminence] Imam Sayyed Ali Khamenei, are focused on the nuclear issue, and there are no other topics being discussed.”

“No negotiation took place regarding the issue of diesel or any other issue,” Sheikh Qassim stated. “Iran is helping Lebanon. It has never taken or asked for anything regarding this matter, and we are working for Lebanon and its people."

In parallel, Sheikh Qassem asserted that “the Lebanese government is responsible for following up on any problems regarding the demarcation of the border.”

“We are waiting for the position of the Lebanese government on the issue of land and sea borders, and when it is our turn, we will do our duty.”

He pointed out that Hezbollah has always been committed to a “government being formed in order to start solving the country's problems. […] The government can work on the issue of wage correction, addressing the fuel crisis, and curbing the dollar.”

“There is no objection to discussing with the IMF to reach common convictions, but we do not accept a ready-made recipe,” Sheikh Qassem continued.

“The government must develop a rescue plan, with one of its goals being to ease the burden on the people.”

He also unveiled that “for about eight months, our team has been working on the voter registration list and the distribution of districts, and we have put in place mechanisms to manage the elections. […] We have a structure and are working on it, and all our preparations are ready for the upcoming elections.”