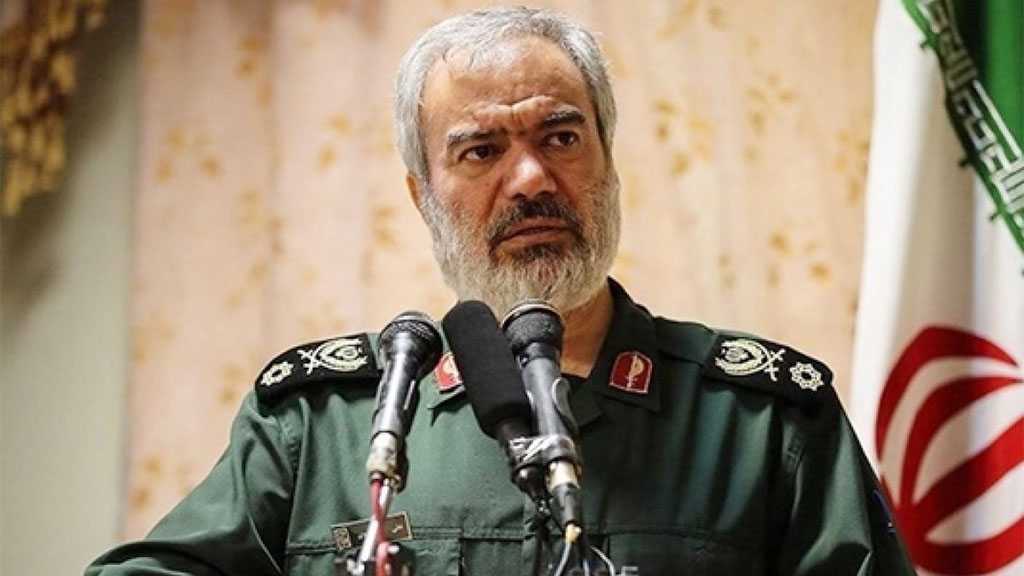 Deputy Chief Commander of the Islamic Revolution Guard [IRG], General Ali Fadavi, said: "When the United States cannot take action against Iran, we will not even allow its proxies to do so."

In a talk show at IRIB published on Friday about the role of General Qasem Soleimani in the region and the defeat of US conspiracies, General Fadavi noted: "During the war, the situation was such that the evils of the great devil of America continued not inside our country, but in lands far away from us, and the only force that existed against these evils was the capability of the Islamic Revolution and at the top of these capabilities the IRG and the Quds Force under the command of General Soleimani."

The top general went on to say: "The Quds Force of the IRG has the responsibility to take actions in the face of the machinations against Islam, the Islamic Revolution, and Iran in distant lands."

He said: "Of course, they slowly realized that the Islamic Revolution could not be dealt with so easily. After that, they waged an eight-year imposed war in which we ostensibly fought [former Iraqi dictator] Saddam Hossein's regime but had about 80 countries behind the scenes."

The deputy commander of the IRG added that for the first time, the two superpowers of the United States and the former Soviet Union came together and fought against us, but the strength of the Islamic Revolution was such that it made everyone affected because God's promise is true.

Fadavi highlighted that the Americans did not have a single victory over the Islamic Revolution during these 43 years.

He noted: "Thanks to the war, the martyrs, and the greatness that was created during the eight years of the war, neither the United States nor any other country dared to fire a single bullet at us, but the war continued on a much larger scale."

"In the last three months, two missile and drone exhibitions were held in Yemen, and these are the cases that are produced inside Yemen, a country that is 100% under siege. If all the Arab countries come together, such an exhibition will not be possible."

The Deputy Chief Commander of the IRG stated: "The Americans have been announcing for about 10 years that they have to look with their allies for a deterrent force against Iran, which means that we are in the third stage and we can hit the first strike and the enemy can do that."

The Americans' escape from the region is not related to the past days, the general noted but started from the beginning of the revolution, however, all the people of the world and the American people should understand that the Americans are fleeing because there is a right front against them that cannot win against this front and this is God's promise.

In his remarks, regarding the latest situation in the Gulf, General Fadavi said "The Americans in the region could not form an alliance and in all the things they wanted to do, they did not succeed at all because it is impossible for making security to be created by someone who is the source of all insecurity in the world while we are the source of security; in propose and in practice, we did not act against the interests of the nations, and wherever we were present, security was created following our presence."

"The Americans are not able to create security at all because their goal is to proceed their own plans and not security for other countries," he added.

"Americans have gone everywhere in the world to create insecurity," General Fadavi underlined.

"The Americans have a military presence at about 700 points. The American people should understand that all the misery they have at home is due to officials who cannot do the right thing rationally and spend thousands of billions of dollars without achievement."