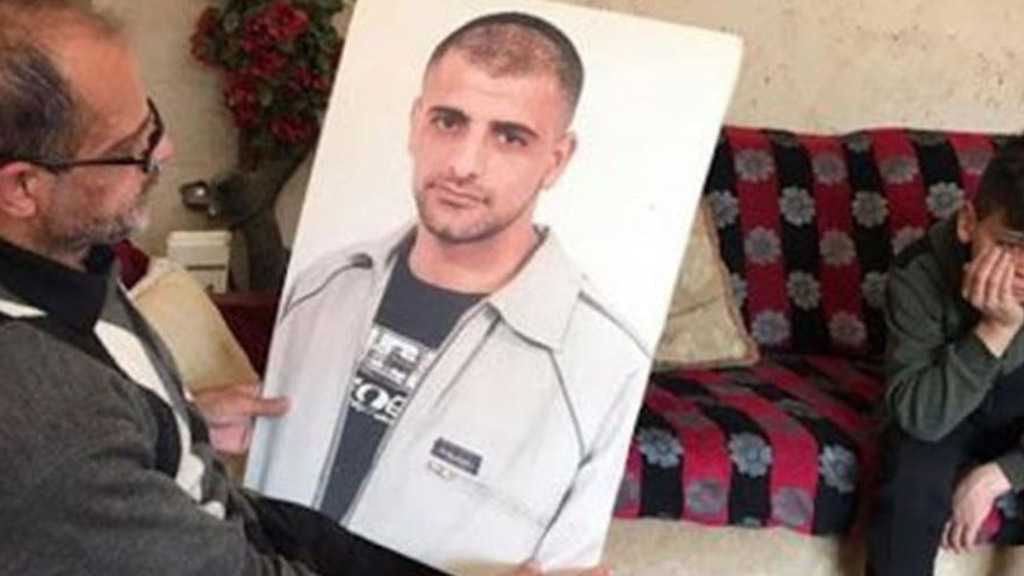 The Palestinian Prisoners’ Society [PPS] has confirmed, Wednesday, that a cancer-stricken former Palestinian political prisoner who was recently released from an “Israeli” prison after his condition seriously deteriorated, has died at a Palestinian hospital in Ramallah, in central West Bank.

The PPS stated that the detainee, Hussein Masalma, 39, from the al-Khader town, south of Bethlehem in the occupied West Bank, was released from an “Israeli” prison in February of this year when his condition became extremely serious after he was denied the right to receive the urgently-needed specialized medical treatment for his Leukemia.

The PPS added that the detainee was first moved to Hadassah “Israeli” medical center, before being sent, a week ago, to the Istishari Arab Hospital in Ramallah.

The PPS held the “Israeli” entity fully responsible for his death, especially since he was subject to medical neglect while in prison, and only started receiving treatment when his condition became serious.

It is worth mentioning that Masalma started suffering from complications and sharp pain in late 2020, and it took the entity more than a month to send him to the clinic of the Naqab Desert detention camp and was only moved to an “Israeli” hospital when his condition became very serious, and the physicians found out that he has End-Stage Leukemia.

The Palestinian was abducted by the “Israeli” Occupation Forces [IOF] in the year 2002 and was sentenced to 20 years in prison. He spent 19 years in prison before he was released due to his serious medical condition.

His release came after various appeals, deliberations, and delays by “Israeli” courts before his lawyer filed an appeal with the “Israeli” “High Court”.

In an interview with the Wadi Hilweh Information Center in Silwan [Silwanic], in February of this year, Masalma stated that he has been suffering for two years and that the “Israeli” physicians didn’t render an accurate diagnosis to his condition.

“For more than two years I have been suffering, and they couldn’t diagnose my condition currently,” he said, “It is not just me, there are so many detainees suffering from serious conditions.”

The PPS said that many Palestinian political prisoners, especially those who have been held captive by the entity for more than 20 years are facing serious health conditions, including cancer.

It called on various regional and international human rights and legal groups, including the World Health Organization, to act on ensuring the release of all ailing Palestinian detainees from “Israeli” prisons and to send an independent medical committee to look into these cases.

After the detainee’s death, various Palestinian political factions declared a general strike, Thursday, and called for massive popular protests across the occupied West Bank, during and after his funeral procession which will be held on Thursday at 11:30 before noon.