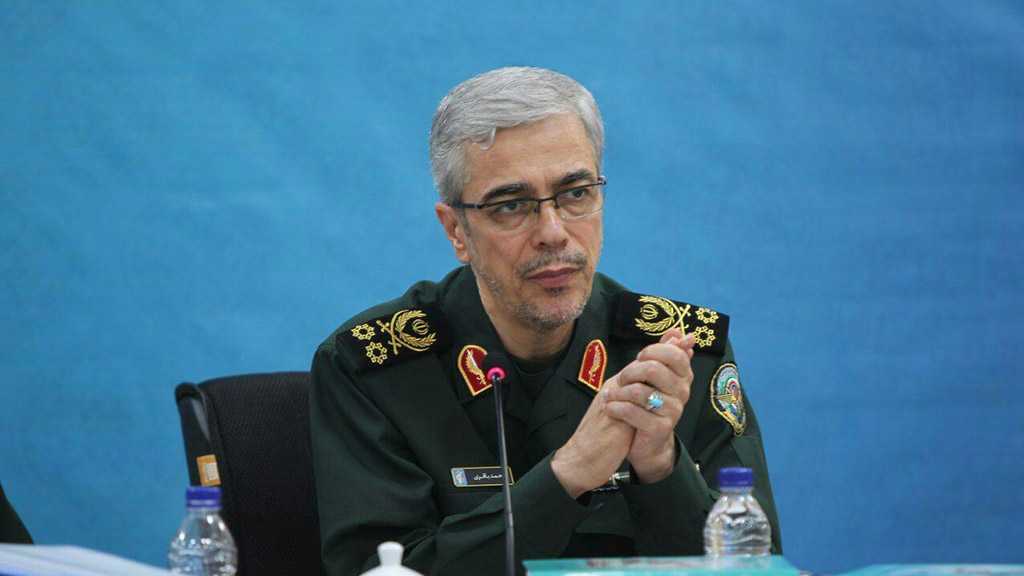 Chief of Staff of the Iranian Armed Forces Major General Mohammad Hossein Baqeri branded the US, the Zionist regime and their followers as the root causes of wars, military tensions, insecurity, miseries and displacement of people in the West Asia region.

In a message released on Tuesday on the occasion of the Sacred Defense Week, the top commander paid tribute to Iranian martyrs and war veterans for their devotion during eight years of battle against the then Iraqi regime’s aggression in the 1980s.

The general said while peace is defined as the lack of war and violence and as respect for the mutual rights of nations, the US, the Zionist regime and their regional and international cohorts have adopted a totally deceptive and hypocritical attitude by portraying themselves as the advocates of humanitarianism and peace.

By dictating a special definition of peace to the world, the US, the “Israeli” entity and their cohorts have been indeed the root causes of wars, challenges, military tensions, insecurity, miseries and displacement of nations in West Asia, specifically in the past recent decades, he added.

Deriding the “Western-Zionist peace-loving circus” and deploring the US’ criminal activities across the world, Major General Baqeri said the US’ deeds depict the depth of a disaster that threatens peace.

“There is also no indication whatsoever of peace-seeking in the globe in the world powers’ military investments and financings,” he stated.

The general said a review of the war on Yemen and the crimes against Yemenis reveals that, contrary to the Western slogans in favor of peace, the bulk of weapons used by Saudi Arabia and its criminal coalition against Yemen has been supplied by the so-called peace-loving countries, particularly the US.

The general went on to say that the Islamic Republic has expanded its strategic depth and contributed to the formation of such strong geopolitical resistance in the West Asia region that no outsider would dare to think of violating the Iranian territories.

Every year, in late September, the Iranian Armed Forces attend parades to honor the Sacred Defense Week in remembrance of the martyrs in the eight-year Iraqi-imposed war.