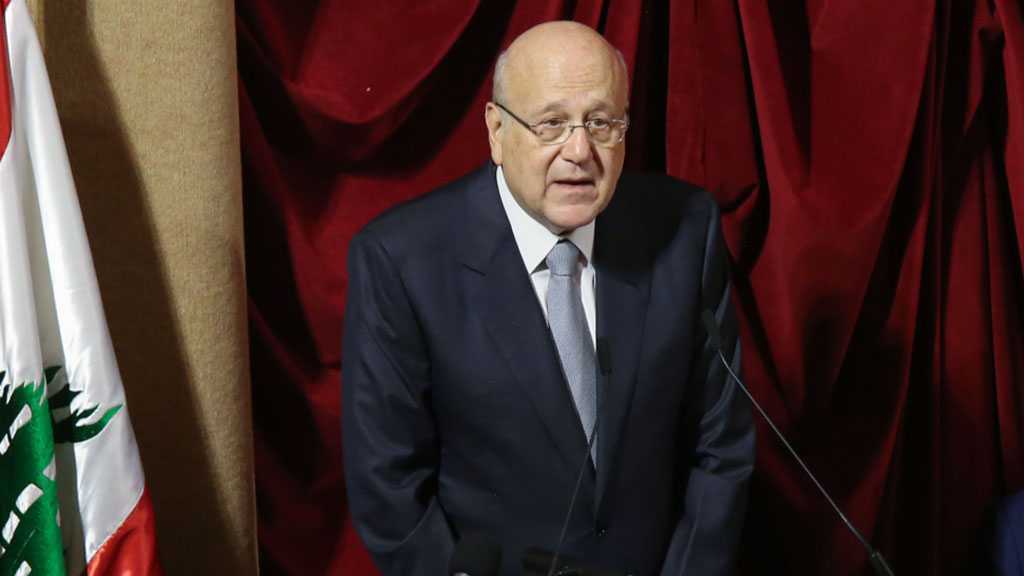 Lebanon's new government secured a vote of confidence from the parliament, putting an end to a 13-month political deadlock that worsened the financial crisis gripping the Mediterranean country.

Following a parliamentary session on Monday, 85 Lebanese lawmakers voted for Prime Minister Najib Mikati's cabinet while 15 voted against it.

The remaining 17 MPs were not present during the voting session, which was hit by a power outage and lasted for more than seven hours.

Mikati has drawn up a policy program aimed at reviving talks with the International Monetary Fund [IMF] on a bailout package to purportedly rescue the debt-ridden country from its worst economic meltdown in history.

The program also involves controversial reforms that donors want to see before they unlock foreign assistance.

Referring to the ailing electricity sector, the Lebanese premier underlined the need for raising electricity tariffs and increasing supply and production.

He further promised that the government would thrash out a plan to restructure the banking sector and revitalize the economy saddled with over $90 billion in public debt.

Paralyzed by severe fuel shortages and wide-scale power cuts, Lebanon has been mired since late 2019 in a deep financial crisis that has caused the Lebanese pound to lose around 90 percent of its value to the dollar.

The US has exacerbated the crisis by imposing a siege on Lebanon in a bid to force the formation of a Western-friendly administration there.

Mikati also said his government would seek to boost Lebanon’s international relations and appealed to “brotherly Arab countries” to help Beirut out of its current crisis.

Mikati stressed that “Lebanese citizens have the right to oppose ‘Israel’s’ occupation, and to respond to its attacks.”

Mikati also pledged that his government would continue to work to liberate territories occupied by the Zionist entity.

The new administration, he added, supports the United Nations Interim Force in Lebanon [UNIFIL] and will demand it “end ‘Israel’s’ invasion of Lebanese sovereignty — land, sea, and air.”

Mikati further said he plans to resume indirect talks with the occupation entity on the demarcation of Lebanon’s southern maritime border with the occupied Palestinian territories.

Lebanon fought off two ‘Israeli’ wars in 2000 and 2006. On both occasions, battleground contribution by its Hezbollah resistance movement proved an indispensable asset, forcing the Zionist military into a retreat.

Lebanon and the occupying regime are technically at war since the latter has kept the Arab country’s Shebaa Farms under its occupation since 1967.