Berlin Mayor Michael Mueller urged US President Donald Trump "not to go down the road of isolation" with his planned border wall with Mexico. 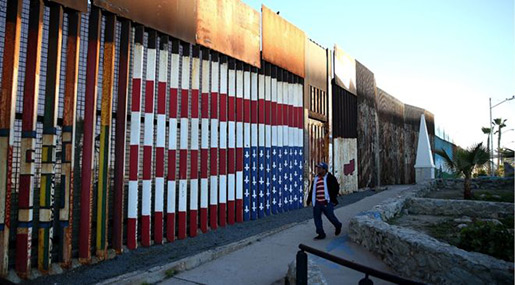 Mueller warned such divides cause "slavery and pain" and would "destroy the lives of millions".

Mueller's statement came as Trump and Mexican President Enrique Pena Nieto agreed to "work out their differences" over the issue.

The planned wall was one of Trump's key election campaign pledges, but it has cast a shadow over the US's relationship with its neighbor.

Pena Nieto has repeatedly stated that Mexico will not pay for the wall and has condemned a US suggestion that it may impose a 20% tax on his country's imports to finance the structure.

"We Berliners know best how much suffering was caused by the division of an entire continent," Mr Mueller said in a statement, referring to Europe's "Iron Curtain".

He said the city could not "silently look on as a country sets about building a new wall".

"We cannot let our historical experience get trashed by the very people to whom we owe much of our freedom: the Americans," Mueller said adding, "I call on the president not to go down the road of isolation," the statement reads [in German]. "Mr President, don't build this wall."

At a joint news conference on Friday at the White House with the British Prime Minister, Theresa May, Trump said he had had a "very good call" with Pena Nieto.

The White House later released a statement describing the telephone conversation as "productive and constructive", adding that both presidents recognized the "differences of positions" on the issue of the proposed wall.

"Both presidents have instructed their teams to continue the dialogue to strengthen this important strategic and economic relationship," the statement said.

He did not reveal the subject of the conversation with Nieto when questioned at the White House, but said the US was "no longer going to be the country that doesn't know what it's doing".