The Council on American-Islamic Relations [CAIR] said it will hold on Monday, January 30 a news conference at its Capitol Hill headquarters in Washington, DC, to announce the filing of a federal lawsuit on behalf of more than 20 individuals challenging the "Muslim ban" executive order signed today by US President Donald Trump. 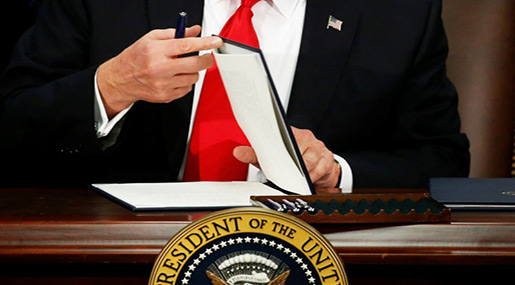 The lawsuit, to be filed in the US District Court - Western District of Virginia, will challenge the constitutionality of the order because its apparent purpose and underlying motive is to ban people of the Islamic faith from Muslim-majority countries from entering the US.

"There is no evidence that refugees - the most thoroughly vetted of all people entering our nation - are a threat to national security," said CAIR National Litigation Director Lena F. Masri, Esq. "This is an order that is based on bigotry, not reality."

"The courts must do what President Trump will not-ensure that our government refrains from segregating people based on their faith," said Attorney Gadeir Abbas, Esq., who is co-counsel on the lawsuit.

"Our First Amendment is under attack. We, as attorneys, are foot soldiers of the American Constitution and took an oath to protect all from being targeted by the government because of their faith," said Attorney Shereef Akeel, Esq., who is also co-counsel on the lawsuit.

The Washington-based civil rights and advocacy organization urges community members to report any bias incidents to police and to CAIR's Civil Rights Department.

On Friday, Donald Trump attended a swearing-in ceremony for War Secretary James Mattis with Vice President Mike Pence at the Pentagon where he signed an executive order establishing extreme vetting of people coming to the US.

"I'm establishing new vetting measures to keep radical Islamic terrorists out of the United States of America," Trump said at the Pentagon ceremony. "We only want to admit those into our country who will support our country and love deeply our people," he said.

Trump also signed an order he said would begin the rebuilding of the US military by "developing a plan for new planes, new ships, new resources and new tools for our men and women in uniform."