Iraq is being invaded for the second time in just over a decade.

American troops have been sneaking into the country's western Anbar province for months. And now Turkey is carving up its own piece of the pie. 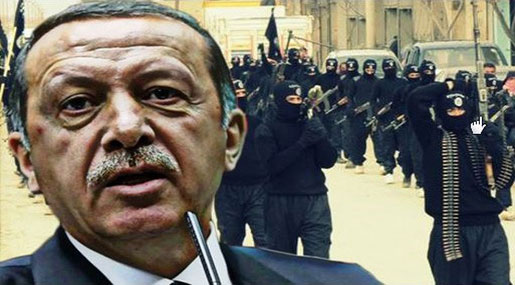 Last week, around 150 Turkish soldiers - backed by two-dozen tanks - deployed to Iraq's Bashiqa, near the country's second city of Mosul, which has been under the control of the Daesh terror group since last summer.

Officials in Ankara kept flip-flopping as concerns the reasons for the incursion; first, they denied the troops were even there. Then, they claimed that the Turkish military was conducing a training exercise, and finally stated that the move was intended to serve as protection for Turkish military advisors in the area.

At one point, the Turkish government claimed that the additional troops were in Iraq to help train local forces fighting against Daesh, and that they had Baghdad's blessing.

They did not. In fact, the central government in Baghdad is fuming.

Iraqi Prime Minister Haidar al Abadi called on Turkey to "immediately" withdraw its forces, before ordering his Foreign Minister to file a compliant with the UN Security Council.

On Friday, Iraq's top cleric, Grand Ayatollah Ali al-Sistani, echoed the same calls, urging the government in Baghdad to show "no tolerance" toward any side that violates the country's sovereignty.

However, no one in Ankara appears to be too concerned - and for a good reason.
The western ‘defenders' of international law and sovereignty do not even care to make it seem as though they are opposed to Ankara's actions.

US State Department spokesperson John Kirby said that he was unaware of Iraq's concerns.

"We want Turkey and Iraq to work this out. And they are." Kirby said.

Turkey's president Recep Tayep Erdogan also weighed in on the deployment,stating that, "withdrawing our soldiers is out of the question for the moment."

It sure sounds like they are working it out.

Maybe that is because, to ‘work this out', Baghdad must accept the de facto annexation of the northern part of Iraq.

According to unconfirmed reports, the number of Turkish troops in Bashiqa has swelled to 900 during the course of this week, suggesting that Ankara is setting up a permanent base there.

The camp occupied by the Turkish troops houses an Iraqi force made up mainly of extremist volunteers and former police officers who previously fled their posts, allowing Nineveh province and its capital Mosul to fall to Daesh without a fight in June 2014. The architect of this contingent is former Nineveh governor Atheel al-Nujaifi, a man countless Iraqi lawmakers have accused of conspiring with Washington to break up Iraq.

The force has always been widely regarded as a counterweight to the Iraq's Popular Mobilization Units and the most effective force against Daesh - that have grown in strength across Iraq with Iran's help.

A member of parliament from Iraq's ruling State of Law Coalition, Saad Al Mouttalibi, told me that Turkey's incursion into Iraq is possibly, "a stabilising force for a new Sunni state".

Jointly ruled by Nujaifi and the Barzani dynasty, which runs the Kurdistan Regional Government [KRG], this new entity would be a Turkish military ‘protectorate'.

With Daesh failing to fully dismantle the Sykes-Picot Agreement and redraw the map of the Middle East, it appears that Ankara has resorted to taking on a more direct role in order to realize its geopolitical aspirations.

And northern Iraq is an easy target - and certainly easier than similar adventures in northern Syria.

Erdogan - NATO's man in the Middle East - who took it upon himself to shoot down a Russian jet bombing terrorists in northern Syria, has recently had his ambitions curtailed.

A combination of Russian sanctions and the deployment of advanced Russian weaponry to Syria, including the S400 surface-to-air missile defence system, have clipped Erdogan's wings.

What's more, the Russians have exposed and are now going after the oil smuggling business between Daesh and Erdogan's inner circle.

According to former Iraqi Government Spokesperson Ali Al Dabbagh, "Turkey is in a critical position, especially because of the oil smuggling, and they want to show that they still have cards to play".

So, Ankara has turned its attention to Iraq.

Turkey and its allies in Washington have made sure to punish the Iraqi premier, who accepted to host the intelligence sharing centre comprised of the newly dubbed ‘4+1' alliance - Iran, Iraq, Syria, Hizbullah and Russia - and welcomed the prospect of Russian strikes against Daesh in Iraq.