The Syrian city of Aleppo is considered the key of the East and its gate according to many historians and travelers, as the city has a great, eventful history, bearing testament to its majesty and authenticity. Aleppo has been, since the beginning of the Syrian crisis, the goal of "Erdogan's" Turkish-backed terrorist groups that aimed at transforming it into a buffer zone along its borders. 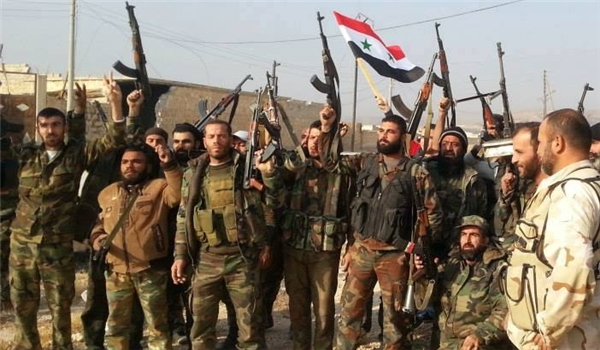 After the terrorist groups benefited from Aleppo's closeness to the Turkish borders to set it as their base in the attacks launched in Syria, would this city be the gate for the Syrian army to restore all Syrian lands back to the state? This is due to the city's strategic influence and great importance that would enable them to move forward into the rest of regions occupied by the terrorists, especially after the Syrian army's announcement of starting the "Syria from the sea to the river" operation. It started with the liberation of the Athriya-Khanaser road that links Aleppo to the capital city of Damascus, in parallel with the beginning of operations to open a secure passage to Kwayres Military Airport, and surrounding the militants in the remaining areas. Hence, the battle of Aleppo becomes a turning point in the Syrian battlefield, according to Syrian Military Expert Dr. Hassan Hassan.

In an interview with "al-Ahed", he noted that "the Athriya-Khanaser road has been completely purged of the armed groups, and secure for the vehicles that have begun to use it." Dr. Hassan said that this is the only secure road that feeds Aleppo, "It is the city's lifeline, this road's importance is due to the possibility that it be used by the Syrian army in its maneuvers, as well as its role in the continuity of everyday life in the city."

Hassan explains to "al-Ahed" that the "effect of losing such a road by the armed groups is that they have lost their ability to maneuver since they can't move between axes anymore. Hence, they are now unable to carry out their attacks." He also noted that the road provides the Syrian army with greater power to track and follow the armed groups.

The man marks the strategic importance of the Kwayres Military Airport as "the main point and the only area in in East Aleppo under the Syrian Arab army's control. The airport's military importance stems from this factor. When the army reaches it, the place will become a focal point and a base for the attacks moving from the direct mission of opening a passage to the airport to some other missions such as re-liberating the remaining areas."

Hassan adds that "as each hour passes, the Syrian army achieves more progress on different fronts, restoring control and returning the areas to the legitimate power. It also expands the circle of security especially around Damascus and the international highway that links the capital with Homs." He mentions that "the same applies to Hamah's northwestern countryside and Edlib's southeast where special ops. are underway and armed groups are pleading for help as their morale is very low, and their will to fight has dwindled. Therefore, they are unable to continue and keep hold of the lands under their control."
"The Syrian Arab Army's main priorities are to secure normal everyday life on all Syrian territories," Hassan confirms.

Regarding the shameful Turkish role played by Erdogan in his support of the armed groups, Hassan considers that "Erdogan's Turkey transformed the Turkish inside into a strategic depth for the terrorist armed groups, in addition to providing the region, Aleppo in particular, with arms and militants, as well as logistic support and reconnaissance."

"Erdogan's dream of a buffer zone disappeared as the Syrian Arab Army will return the region to its previous state," he explains, adding that this "grants the army an additional ability to continue its purge of the remaining areas." The expert mentions that "the terrorist groups' power to commit crimes would reach its minimum level should the army progress at the same pace."

Dr. Hassan concluded his interview with "al-Ahed" on the reflections of the field victories on the political conferences and discussions, noting that "without the field achievements, there wouldn't have been any Vienna conference or any other meetings. The sharp discourse of Western and even regional countries has begun to shift, thanks to the Syrian army and its allies' battlefield performance."

For his part, Military Expert Omar al-Ma'rabouni noted that "the ongoing battles fall under the strategy of restoring control over all Syrian lands," adding that the main issue, which is taking place via the military operation conducted by the Syrian army, is related to the grand land operation the army launched "from the sea to the river."

Ma'rabouni clarified that the Syrian army has adopted a tough strategy to force the armed groups to withdraw, citing the developments in Khan Toman.

The Soviet Academy graduate tells "al-Ahed" "we are now before a phase of binding militant movement and dealing heavy blows." He further adds "we are still in the primary stage of airstrikes targeting the armed groups' headquarters, storehouses and supply paths. Later on, we will face the second phase of air operations that favor offensive airplanes and striking targets from up-close."