Syrian President Bashar al-Assad described in an interview with the Swedish Expressen Newspaper the outcomes of Moscow talks as a breakthrough. He further stated that the UN envoy's Aleppo plan, which is supported by the government, was spoiled by external intervention, renewing his warning that the terrorism imported to Syria will "bite" its backers whenever it has the chance. 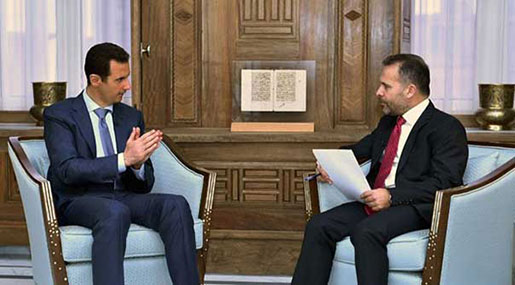 He also called on Sweden to influence the EU to lift the economic sanctions imposed on the Syrian people.

"Terrorism is serious and dangerous because it doesn't have borders, it doesn't have limits. It could hit anywhere, it's not a domestic issue. It's not even regional; it's global, that's why it's always dangerous."

Al-Assad further mentioned that "in our case, it's more dangerous, let's say, the situation is worse because this time it was having a political umbrella by many countries, many leaders, many officials, but mainly in the West."
"Sometimes you win, sometimes you lose, and that depends on many criteria, some of them related to domestic, internal and military criteria, or factors, let's say, which is more precise."

On this level, the head of the Syrian state said: "Al-Nusra Front which is part of al-Qaeda, and the Turkish government or institutions or intelligence, were like one army in that battle, so it doesn't depend on the weakening of our army. It depended more on how much support the terrorists have from Turkey."

On Turkey, Qatar, and Saudi Arabia, he added: "They're not independent countries, so they won't have their own agenda. Sometimes they have their own narrow-minded behavior or vengeful behavior or hateful behavior that's been used by others' agenda, let's be frank here, sometimes the United States. So, we cannot say that they have their own agenda, but they haven't changed. They still support the same terrorists, because this behavior is not related to the crisis in Syria. They supported the terrorists in Afghanistan, they supported the Wahhabi ideology, the extremism that led to terrorism recently in Europe, for decades, and now they are supporting the same ideology and the same factions under different labels and names in Syria. So, there's nothing to change because this is their natural behavior."

According to al-Assad: "The United States in the 1980s called the same groups of al-Qaeda and Taliban, in Afghanistan, they called them holy fighters, and that's what president Bush described them as, holy fighters. And then, after the 11th of September 2001, they called them terrorists. The problem with the United States and of course some Western officials is that they think you can use terrorism as a card in your pocket, as a political card. Actually, terrorism is like a scorpion; whenever it has the chance, it will bite. So, they know, but they didn't estimate how dangerous terrorism is to be used as a political card."

On the results of Moscow talks, al-Assad said: "This meeting was the first time to reach - because you know we had many dialogues before - this is the first time to reach an agreement upon some of the principles that could make the foundation for the next dialogue between the Syrians. We haven't finalized it yet, because the schedule of that meeting was very comprehensive, so four days wasn't enough. Because when you have a breakthrough, even if it's a partial breakthrough, it means that the next meeting will be promising in reaching a full agreement about what are the principles of Syrian dialogue that will bring a Syrian, let's say, solution to the conflict."

Al-Assad has blamed Norway and other Scandinavian countries for producing "the most dangerous leaders of Isis in our region", in a video interview with Sweden's Expressen newspaper.

He said countries like Norway had only themselves to blame for their homegrown "ISIL" fighters, as "European officials" had for years been "selling their values and allowing the Wahhabi dark ideology to infiltrate and be instilled in some communities", in exchange for money from "countries like Saudi Arabia and Qatar".
"The most dangerous leaders of "ISIL" in our region are Scandinavian...that's what we have as information," he added.

Al-Assad said that he had warned at the start of Syria's civil war that it would ultimately lead to terror attacks in Europe and beyond.

"They didn't listen, so what happened was warned of before, and what we saw in France, in Charlie Hebdo, the suicide attempts in Copenhagen, in London, in Spain, ten years ago, this is only the tip of the iceberg."

"You have ups and down, you have wins you have losses and that depends on many criteria," al-Assad said. "We are still running the country."

Regarding Hizbullah's presence in Syria, al-Assad clarified: "For example, we had cooperation between the Syrians and the Iraqis even before the rise of "ISIL" recently during the summer of last year in Mosul. Before that we had good cooperation, intelligence and even military, for one reason; because the Iraqis were aware that the terrorism in Syria could spill over to Iraq, and that's what happened in Mosul. The same is with the Lebanese. So, Hizbullah is aware that terrorism in Syria means terrorism in Lebanon. Chaos here means chaos there, so this kind of regional cooperation is very important for all of us."